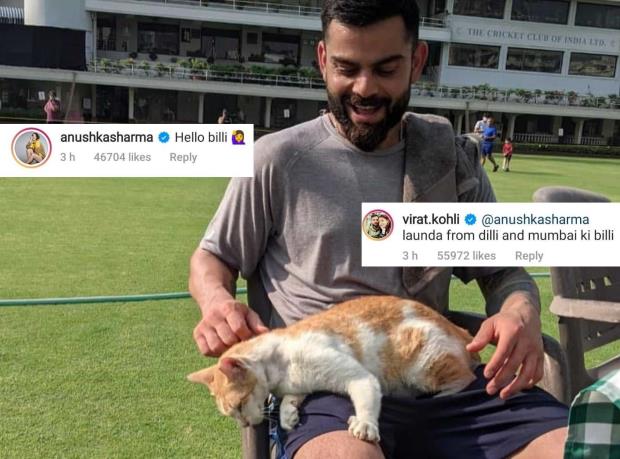 Virat Kohli is currently in Mumbai where he is preparing for the second Test versus New Zealand which starts on December 3. To note, Kohli is on a break following the T20 World Cup. On Tuesday morning, the Indian skipper took to his social media handles to share the pictures of an unexpected visitor he had during a practice session at The Cricket Club of India (CCI) in Mumbai. In the photos, he is seen pampering a cat while it sat on his lap.

Reacting to the post, Arjun Kapoor dropped a hashtag, “desi Dwayne.” The actor was also seeking approval from his co-star and friend Varun Dhawan. On the work front, the actress has been seen in advertisements but not in films. She was last seen in the film Zero which co-stars Shah Rukh Khan. The actress has this year delivered a baby girl Vamika. She is seen accompanying her husband on matches and shares updates from there.

Also Read: The Internet Can't Get Enough Of "Adodrable" pictutre of Anushka Sharma And Virat Kohli

Virat Kohli will not be playing the first Test in Kanpur as he was rested for the series opener and the 3-match T20I series that preceded the Test series. Ajinkya Rahane will lead India's Test team in the series opener in Kanpur. Virat Kohli gave up T20I captaincy, citing workload management but maintained he will continue to lead the side in Tests and ODI cricket. Kohli has begun training for the 2nd Test well in advance as he will be hoping to hit peak form once again. Notably, November 23 marks 2 years since Kohli scored a hundred in international cricket. The India captain got a 3-figure score in the pink-ball Test against Bangladesh in Kolkata.