The Leicestershire police were faced with "significant aggression" and some were injured as they dealt with disorder in Leicester, the force's chief constable, Rob Nixon, has said, as per media reports. 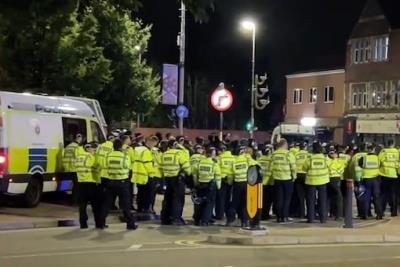 The Leicestershire police were faced with "significant aggression" and some were injured as they dealt with disorder in Leicester, the force's chief constable, Rob Nixon, has said, as per media reports.

Sixteen officers and a police dog were injured on Saturday as they worked to stop groups of men from attacking each other, Nixon said, BBC reported.

The unrest came amid tensions involving mainly young men from sections of the Muslim and Hindu communities, the report said. The policing operation is continuing into Monday evening.

Nixon said officers have been brought in "from different parts of the country" to help diffuse the tension.

"They were faced with significant aggression, I think they faced some very, very challenging situations, and I actually do believe they put themselves in danger to protect the public," he said.

"I think we were faced with a significant number of people who were intent on causing significant injury to other people, and my officers stood their ground," Nixon added.

According to the police, the original disorder on Saturday had been sparked by a protest in the East Leicester area.

Another protest involving about 100 people followed on Sunday, but the police said there had been no further disorder overnight into Monday, BBC reported.

Two people were arrested during the disorder on Saturday - one on suspicion of possession of a bladed article, and the other on suspicion of conspiracy to commit violent disorder.

Fifteen people have been arrested in an operation to "deter further disorder" in Leicester, BBC reported.

There was large scale unrest on Saturday amid tensions involving mainly young men from sections of the Muslim and Hindu communities.

The police said it had been sparked by an "unplanned protest". Another protest involving about 100 people followed on Sunday.

The force added that all the 15 people arrested on Sunday remained in custody.

Leicester Mayor Peter Soulsby said he and community leaders were "baffled" by the events, saying they had been "fanned by some very distorted social media" and "a lot of people who came in from outside", BBC reported.

During Sunday's protest, people congregated on Belgrave Road, with members of the crowd telling the BBC they were on the streets as a result of the recent unrest.

Officers closed the road and some of the crowd briefly tried to push through police lines, complaining they were being prevented from marching.

Later, the protesters walked along the Green Lane Road in the North Evington area, followed by officers.

There was also police presence on Humberstone Road, with several nearby streets closed off.

The force said in a statement: "Officers became aware of groups of young men gathering on Sunday afternoon in the North Evington area of the city. Officers spoke to them and took steps, including putting in place a temporary police cordon, to minimise harm and disturbance to communities."