In India, the festival of Dusshera is celebrated on the tenth day of Navratri. 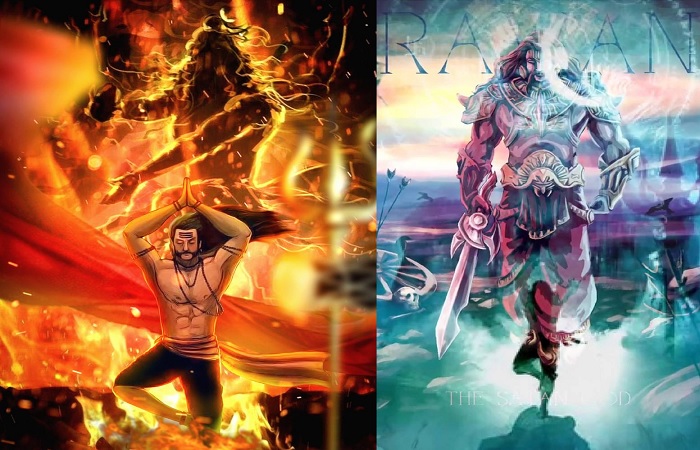 Dusshera is celebrated on the tenth day of Navratri. The day marks the victory of good over evil. Even in the modern world, if anyone thinks about evil, Ravana’s name would appear in one’s mind.  History has always taught us that Ravana was a terrible person with long horns and was filled with lust. Though demon king Ravana is the prime antagonist character in the epic Ramayana as he kidnapped someone’s wife to fulfill his lust. The epic stories have always told about the winner and painted the loser as a villain.

But many don’t know about the real character and history of the King of Lanka. As the epics passed down generation by generation people have started to believe that everyone is not just black and white, some are grey as well and have some beauty hidden in them.

We as Indians, only know some facts about Ravana, including, he had 10 heads, he was full of lust and kidnapped Maa Sita, he was all about ego, and Lord Rama defeated him after a 10-day long fight. But there is much more to know about his personality, which is hidden in the past.

Putting it in a nutshell, here are some big facts about the King of Lanka:

1.) Ravana was not a demon, he was half–Brahmin. His father was Vishwashrava, a rishi belonging to the Pulastya clan, and his mother Kaikasi belonged to a demon clan.

2.) Ravana was intellectual, was well-read and educated. He has knowledge related to all Vedas and Puranas. He knew physics and mathematics. It is believed that his vimana (vehicle) was the oldest flying machine.

3.) Ravana was a great ruler. He has committed fratricide to reach the throne but he was absolutely loved by the people of Lanka. Under Ravana, there was no poverty and Lanka was made by “gold”. Even the poorest, eat their meal on a plate of gold.

4.) Ravana was a maestro in playing vena and his love towards music was unimaginable.

5.) He was an expert in astrology. It is believed that he has asked all the planets to remain at their best position, during the time of his son’s birth, so that his son becomes immortal.

6.) Apart from his desire for Sita, he was a caring and loving father and husband.

7.) He neither laid a finger on Sita nor forced her using his strength. He was always gentle and pledged her. He took Sita to Lanka, only after Sita’s brother-in-law Lakshman insulted Ravana’s sister Soorpanakha.

Because of all these facts, many tribes worship Ravana and on the Dusshera they stay at home on Ravan dahan and mourn and do the purification by taking bath. Some also perform ‘shraddha' for Ravana on the dashmi of shraddha paksha.