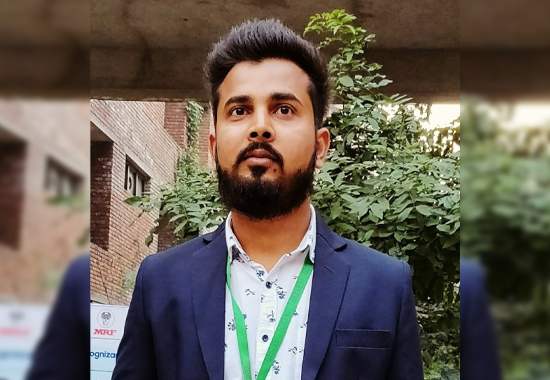 Making a worldwide imprint with his creditable startup "Syntax Edutek”, an MBA student Amit Kumar of Mittal School of Business (MSoB) at Lovely Professional University (LPU) has been recognized during the largest start-up competitions in Southeast Asia.

Amit’s Startup deals with a full-stack vocation stage for understudies, businessmen and occupation searchers. Here, ‘Full-stack’ refers to a group of programming languages and tools, through which a user learns handling of both the front-end and back-end development, along with a few concepts of wanted design.

Amit is extremely happy on this achievement, and stands indebted to the unique facilities provided to him by LPU’s efficiently running Startup School for winning such an international honour.

Like the organizing body, Amit too holds that a ‘Startup’ is a non-stop ‘Wheel’, which makes it a continuous process. To make it go, one should never hesitate and keep moving forward like a wheel by all belief and willingness to innovate and achieve.

Now, selected “Top 50” startups are to be connected through an online platform with potential investors, partners, and customers in the local market as well as in Southeast Asia at large.

Key players at the event were from the Government, VCs, large corporations, startups accelerators/ incubators, associations, and startup support organisations. In fact, ‘Startup Wheel’ (SW) is a six month long ‘Startups’ competition, run annually for startups and young entrepreneurs all around the world.

It is known as the largest, prestigious and the most intensive start-up events in Southeast Asia for young people who are passionate about startups. The competition had two tracks-One which accelerates the “Local Track” startups, and the second one “International Track” which creates rooms for international startups.

Also read:  In Points: Delhi schools, colleges to reopen from September 1 with curbs

The latter expands participants’ business not only to the local market but also connects with the startup ecosystem in Southeast Asia.