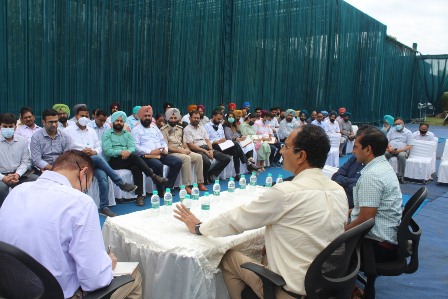 Deputy Commissioner Varinder Kumar Sharma on Monday reviewed the preparations and arrangements in view of the fourth edition of ‘Progressive Punjab Investors Summit’ to be organised at Kingsville Resort, Ferozepur Road, Ludhiana on October 27, 2021.

Chairing a high-level meeting at the venue, Deputy Commissioner Varinder Sharma said that under the visionary leadership of Chief Minister Charanjit Singh Channi, Punjab Government is organising fourth edition of the ‘Progressive Punjab Investors Summit’ on October 26 & 27, 2021. He said that the first day event will be conducted virtually while the second day, i.e. October 27, summit will be held at KingsVille Resorts, here.

He informed that the Chief Minister Charanjit Singh Channi along with various Cabinet Ministers would preside over the function. He said that more than 500 industrialists as well as from India and Punjab also would participate in this mega event.

Deputy Commissioner ordered constitution of various committees and fixed the duties of officers from several departments for the smooth conduct of the summit. He asked them to discharge their duties with utmost dedication and sincerity and ensure fool proof arrangements by meticulously planning and execution.