Madonna birthday kiss: Who are the two women spotted in Popstar's viral video? Here's what we know so far 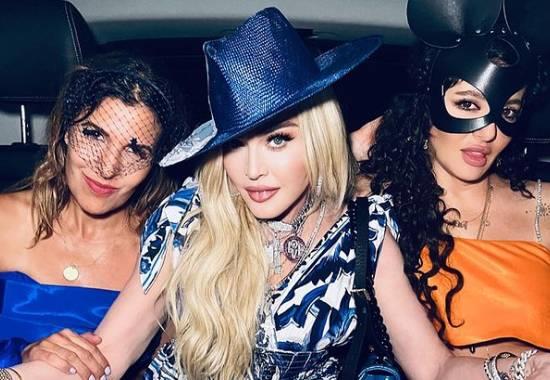 American Pop star Madonna on Tuesday celebrated her 64th birthday and ever since then the 'Queen of Pop' has been trending on social media. Although there are lakhs of wishes poured in for Madonna's birthday, her French kiss video raised the eyebrows of her fans around the world. In Fact, Madonna birthday kiss viral video started doing rounds on social media worldwide, with her fans wondering who might be the two women the pop star kissed in the back of her car.

Madonna kiss video was shared by the pop star herself on her Instagram in which she was seen partying and celebrating her 64th birthday in Italy with her friends and manager. In the video, Madonna was seen partying, however at the end of the video, she can be seen passionately kissing two women in the back seat of her car, while her manager Guy Oseary can be seen in the front seat.

Now, those wondering who were the women that Madonna kissed can read further-

Madonna shared her picture with the two women and also tagged them on her photos. While one woman's name is Maha Dakhil Jackson as per her Instagram profile, the other woman seemed mysterious as can be seen covering her face on her personal social media account.

For those who don't know, Maha Dakhil Jackson is said to best friend of Madonna who works as a Hollywood agent. In her Instagram profile, Jackson can be seen with multiple Hollywood actors including Tom Cruise. As per Variety, Maha Dakhil Jackson is the agent of motion picture based in the literary department, CAA. Dakhil has played an integral role in building CAA’s roster of international and independent filmmakers, identifying and signing such helmers as Eric Toledano and Olivier Nakache, whose French drama.