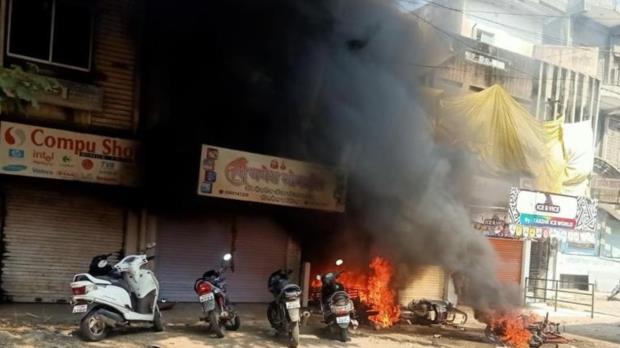 Fake news shared on social media was responsible for the recent incidents of violence in some areas of Maharashtra, the Cyber Cell Department of Maharashtra Police has said.

In a report submitted to the state home department, the Cyber Cell Department has listed a total of 36 social media posts -- 25 on Twitter, six on Facebook and five on Instagram -- that spread 'misinformation'.

On November 12, stone-pelting took place during the rallies taken out by some Muslim organisations in Maharashtra in protest against the purported communal violence in Tripura. The incidents mainly occurred in Amravati, Malegaon and Nanded city.

In Amravati, over 8,000 people had gathered outside the district collector's office on Friday to submit a memorandum demanding that atrocities against the minority community be stopped. When people were leaving, stone-pelting took place at three places between Chitra Chowk and Cotton Market under the limits of the Kotwali police station.
On Saturday, a mob hurled stones at shops in Amravati's Rajkamal Chowk area during a bandh called by the BJP, prompting the police to impose a curfew. The rallies were organised by Raza Academy, a radical Muslim outfit that publishes literature by Sunni scholars. Maharashtra Home Minister Dilip Walse-Patil said the protest rallies by the Raza Academy were illegal as they were given permission only for submitting memorandums, not for taking out a march.

Following the violence, a four-day curfew was imposed in Amravati from November 13-16 which has been extended till next week with relaxations.At least 188 people have been arrested till Tuesday in connection with the incidents of violence.