Big names like Kunal Kamra and Varun Grover, known for their biting political satire, constantly remain in the eye of extremists. From getting life and rape threats to cases being filed against comedians, it won’t be wrong to say that BJP’s ‘Hindustan’ lacks a sense of humour. 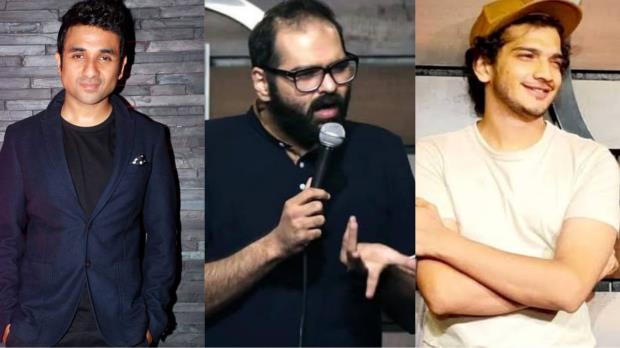 Popular actor-comedian Vir Das is in trouble as a BJP leader has filed a police complaint against him. The furious step is in response to Vir Das's popular "I come from two Indias" video, which has been hotly debated on social media.

Aditya Jha, a BJP Delhi spokesperson, has filed a case with the Delhi Police, accusing Vir Das of insulting the country while on foreign land.

Reacting to Vir Das’ six-minute monologue, Mr Jha asserted that he "will not tolerate anyone insulting our nation in another country" and will fight for the comedian’s arrest.

This might appear bizarre to those unversed with comedian Munawar Faruqui’s arrest and threats to several comedians like Kunal Kamra. For the rest, the FIRs and complaints against comedians, actors, artists, journalists or anyone who speaks about the country’s deteriorating condition are now common.

Stand-up comedy is one of the fastest-growing sectors of Indian entertainment, with comedians having a fan following of over tens of millions on social media. However, the comedy scene has grown exponentially in an environment that is increasingly hostile to it.

Big names like Kunal Kamra and Varun Grover, known for their biting political satire, constantly remain in the eye of extremists. From getting life and rape threats to cases being filed by extremists groups, it won’t be wrong to say that BJP’s ‘Hindustan’ lacks a sense of humour.

Here are a few controversies that indicate BJP is intolerant towards comedians or even the public’s opinions.

Also Read: Who is Vir Das? Know why story behind #VirDas trends on twitter

Indian comedian, actor and comedy musician, Vir Das landed in controversy after a video edited from his recent performance in the US went viral on social media. Now, he is being called anti-national.

During his performance, Vir talked about some of the pressing issues in the country, such as the battle against the coronavirus pandemic, rape cases, a crackdown against comedians and farmers’ protests.

After being shared, the video went viral online, triggering a debate on social media. While some of the people slammed the comedian for his remarks, some lauded his brave stance.

A young and successful comedian of India, Munawar Faruqui was arrested for allegedly hurting religious sentiments on January 1 2021, just before he was about to start his performance at a cafe in the popular 56 Dukan locality of Indore.

Eklavya Gaur, convenor of the Hind Rakshak Sangathan and son of Bharatiya Janata Party legislator Malini Gaur had filed the complaint against 30 year old comedian after which the latter was booked under several charges.

Gaur stated that he and his associates went to see the show where the alleged indecent jokes about Hindu gods and goddesses and Union Home Minister Amit Shah were made.

Munawar stayed in jail for at least two months before getting bail, which was initially rejected multiple times. Despite, Munawar repeatedly apologizing and claiming his jokes were not meant to hurt anyone’s sentiments and it’s being crystal clear that the context of his jokes was distorted, the case continues.

Also Read: Munawar Faruqui - What’s been up with the man with a smiling face and a penchant for humour?

A political comedian with billions of fan following over social media, Kunal Kamra has a history of absurd police complaints and threats against him.

Kamra is known for openly criticising Narendra Modi, Amit Shah, and the BJP government, and he frequently takes sarcastic jabs at them in his stand-up routine as well as through social media posts and memes.

Best known for his episode with Arnab Goswami in an airplane, Kamra was again in soup when he criticised the Supreme Court’s order granting bail to the Republic TV editor-in-chief in a 2018 abetment to suicide case.

Despite the massive outcry, the comedian refused to apologize, a contempt case was then filed against him.

Tanmay, who was initially a member of the comedy collective All India Bakchod (AIB), found himself in hot water after tweeting a meme of Prime Minister Narendra Modi with a dog filter on Snapchat.

For the joke, an FIR was filed against him under Section 500 of the IPC (defamation) and Section 67 of the IT Act (punishment for publishing or transmitting obscene material in electronic form).