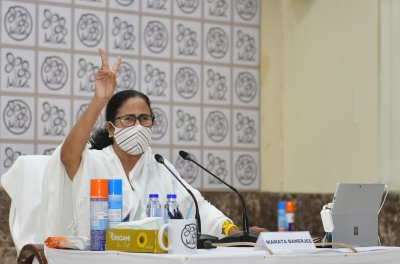 Clad in her trademark white saree and chappal, Bengal’s Didi alias Mamata Banerjee took oath as Chief Minister of West Bengal for the third consecutive term. She won the West Bengal Assembly Elections on May 2 with a thumping majority.

The rest of the cabinet and the council of ministers will be sworn in on May 9 i.e. on the birth anniversary of Rabindranath Tagore.

Mamata Banerjee called on Governor Jagdeep Dhankhar at Raj Bhavan and first resigned as the chief minister and then she was administered the oath of office and secrecy again.

Earlier Tuesday, Banerjee in an interview to a private channel spoke about post-poll violence in parts of the state and accused the BJP of trying to create a disruptive environment in areas where they have won. She also said she would tackle the violence with solidity and the culprits won’t be spared.

She also underscored combating the Covid-19 crisis should be the first priority.