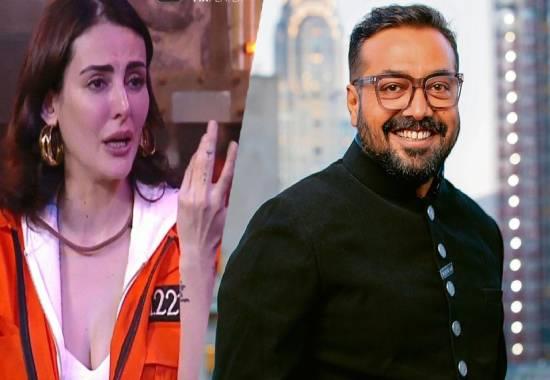 Bollywood actress Kangana Ranaut's show 'Lock Upp' has been creating quite a buzz ever since it started airing with a handful of controversial contestants. Every weekend. On Saturday's Judgement day, Lock Upp created a huge buzz after Munawar Faruqui's marriage and Mandana Karimi's secret affair confession took the centre stage. Lock Upp contestant and actress Mandana Karimi in order to save herself from the eviction of the show spilled her secret in front of the host Kangana Ranaut following which everyone got teary-eyed.
Mandana Karimi Director row took the centre stage when fans on social media started to express their solidarity for the actress. Now only this Mandana Karimi Director row also started a speculation & guessing game by the fans on social media. Amidst the ongoing Mandana Karimi Director row, her old remark on ace film-maker Anurag Kashyap has gone viral on social media.
As per a report of the Hindustan Times, after making her entry in Bollywood and Indian Entertainment Industry, Mandana Karimi did not get any work for almost two years. She was in one of the worst phases of her life. Therefore she asked for Anurag Kashyap's help.  "A year and a half ago I spoke to a dear friend of mine, (filmmaker) Anurag Kashyap, about why I wasn't getting work and what I should do. He gave me the best advice -- 'work on your craft, take workshops, stop trying too hard, trust your journey, be honest and work hard not for money but for the love of art'. He gave me a few numbers of acting workshops where I met Saurabh Sachdeva (acting coach) and started training with him for four months. His classes changed me as a person and as an actor," Mandana had said.
Notably, Mandana Karimi Director row has started a guessing game for fans on social media. And people are relating Mandana Karimi's old remarks about the Directors with the current revelation.
What is Mandana Karimi Director row?
Also Read: Munawar Faruqui confesses he is married, and has a child, leaves GF Anjali Arora in shock; Check pics
'Lock Upp' contestant Mandana Karimi revealed on the show that she had an abortion and also opened up about her relationship with a well-known director. When on the show she was asked to share a secret Mandana talked about her secret affair with an ace director. She said that their relationship became very strong in a few months and he planned to settle down with her but they decided to keep it secret because she was awaiting divorce from her ex. In fact, she got pregnant with his child and when he came to know about this reality he just backed off. He also asked her friend to convince her for abortion. He kept giving multiple reasons and denied taking care of the baby so she had to be strong and go through an abortion.
Mandana said: "I didn't want to give birth to a child when he is not aware of his father".
Kangana consoled her, saying: "In the city of dreams, there is so much of brutality and survival that no one talks about such incidents".
Fans react to Mandana Karimi Director row