In the footage the scooter driver can be seen avoiding a pillar just a few feet away. The rider again gets on the tarred road again and gains pace 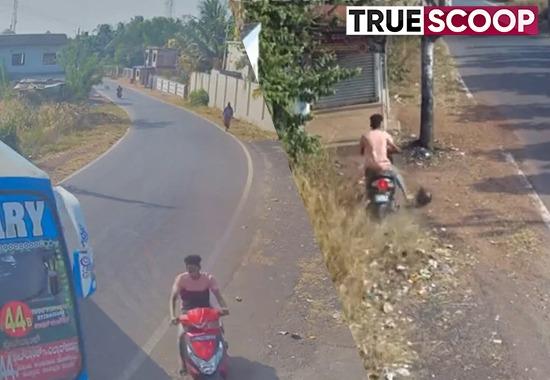 In a miraculous incident a speeding scooter avoided a major tragedy in Mangalore, Karnataka. There was a narrow escape for the driver as they both were about to collide. The bike rider can be seen riding his scooter still in high speed. The CCTV footage has shocked the internet.
In the video, the bus can be seen taking a U turn. The road was free from traffic and the bus drivers with this in mind took a U turn. The speeding scooter can be seen in the video passing in front of the bus. The bus driver suddenly made a stop immediately as the scooter rider made a narrow escape. Not only this, but the scooter driver can also be seen avoiding a pillar too just a few feet away. The rider again gets on the tarred road again and gains pace.
The video was circulated on the internet by the city’s Twitter handle, on the 11th of January. The video has left the netizens wondering who is at fault.
A Twitter user tweeted—“ Which bus takes a u turn without checking what is coming and without indication.”
Also Read: Punjab Elections 2022: Internal quarrels increase as Channi and Sidhu demand the announcement of CM face
“While doing a u turn, after the front of the vehicle steered to an angle the rear view in side

mirror is a blindspot. That's y supportive staffs assist during such times in heavy vehicles. Many drivers turn, reverse very slowly to get sufficient reaction time for both vehicles.” Tweeted another
“Overspeeding by the biker and carelessness by the bus staff. Need not be termed as miraculous escape and all that to grab attention. Cops should book both.” read another Tweet.