International Women's Day: 103-years-old Mann Kaur receives the 'Nari Shakti Puruskar' from the President. Who is She?

She is the oldest person to walk along the top of Auckland's Sky Tower (2017). Despite suffering from osteoporosis, she has displayed how her determination is key to her success. 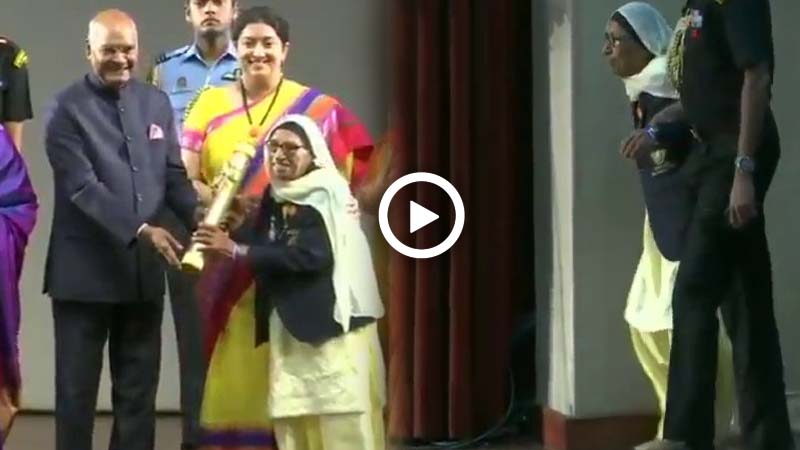 Several women from India were awarded Nari Shakti Puruskar from President Kovind on Sunday. But when the award was given to a 103-years-old woman named Man Kaur from Chandigarh it attracted everyone's eyes. Mann Kaur is known as 'Chandigarh Ka Chamatkaar', who began her athletic career at the age of 93.

Mann won 4 Gold (Track and Field) at World Masters Athletic Championship, Poland. She has set a record by becoming the world's fastest centenarian at the American Masters Game, 2016.  She has won the silver medal in the long jump (3.21 m) and a bronze in the 100 m and has also been associated with Fit the India Movement.

She is the oldest person to walk along the top of Auckland's Sky Tower (2017). Despite suffering from osteoporosis, she has displayed how her determination is key to her success. Mann has won more than 20 medals in World Masters Games and America Masters Game, Gold, 100 m World Masters Games at New Zealand in 2017, 100, and 200 m at National Level, Gold (100 m and 200m) at Worlds Master Championship at USA in 2013.

Also Read: International Women's Day: PM Modi gives away his social media handle to 7 women achievers. Who are they?

Get the latest update about True Scoop News, check out more about English News, Mann Kaur, All About Mann Kaur & 103 Years Old Woman Gets Award From President