Visually impaired cyclist, Ajay Lalwani is set to embark on a journey of over 7,000 kilometres, to set a new world record and promote street lighting in India. With blind cycling expedition 2021, netizens #CheerForTeamAjay. 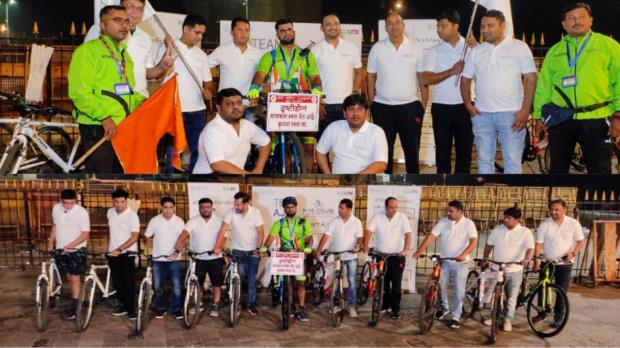 Where cycling on busy roads of Mumbai is challenging for most people, visually impaired cyclist Ajay Lalwani does it efficiently and that too across major cities of India. While netizens deem Ajay’s zeal for cycling a “miracle”, the adventurer is set for his one of the longest journies- Mumbai to Kashmir to Kanyakumari and back to Mumbai. But this time, the miraculous cyclist and his team, along with setting a new world, are promoting the cause of road safety.

The Journey from Mumbai to Srinagar to Kanyakumari to the final destination Aamchi Mumbai will kick start on November 15, 2021, from Gateway of India at 4 am.
With the initiative of raising awareness about road safety across the nation, Team Ajay is collaborating with Signify to illuminate the streets of India with the Blind Cycling Expedition 2021.

Who is Ajay Lalwani?

Having an extraordinary zeal for cycling, an eight year old boy who was born with visual impairment would ride a bicycle to his school. The boy was Ajay Lalwani.

Born in the Buldhana district of Maharashtra, Ajay would ride to his school in Nandura, which was at 4km distance from his house. His four brothers would guide him past every turn, bump or obstacle, with two of them protecting him from right and other two from left.

Also Read: Who is Rani Kamlapati? The Gond queen on whom Habibganj station has been renamed

It won’t be wrong to say that it was because of his brothers' immense support and training that Ajay now travels thousands of kilometres and has set multiple records.

The brothers are now replaced by Ajay’s friends and other cyclists willing to be part of his adventures, which is called #TeamAjay.

Where a fellow cyclist guides Ajay of traffic, stray animals, turns and obstacles, he rides through several towns in India including metro cities.

About 15 years ago, Ajay had begun living life differently. He started participating in sports like cycling, swimming and running. He has earned multiple national and state level medals in various sports. He also holds the world record of cycling 2,010 km on his bicycle.

"Many people die in accidents at night, and the main cause is a lack of proper road lighting. This time, I'll travel over 7000 kilometres. Through my campaign, I hope to persuade India to illuminate roads so that people like me can travel safely," says Ajay.