Mexico Football Match: Violence breaks out among fans, at least 23 injured and 10 dead

The videos of such a horrifying incident are circulating on social media. Condemning this act, FIFA said its ‘unacceptable and intolerable’. 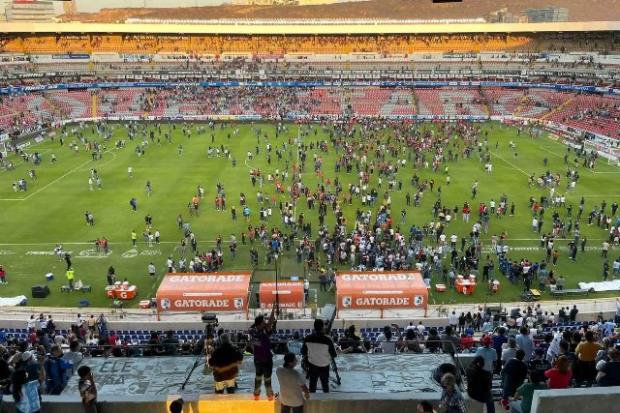 At least 23 were reported injured and 10 dead as violence broke out between fans during a football match in Central Mexico. The fight soon took such a serious turn that there was an outcry in the stadium and the match had to be suspended in the 62nd minute.
As security guards opened the stadium doors to allow fans to get to safety, some instead continued to exchange blows, forcing the game to be stopped and sending the players to the locker room.
One fan could be seen pulling a knife to cut the nets of one goal. Others destroyed one side's bench and some fought in the tunnel to the field.
The videos of such a horrifying incident are circulating on social media. In the video, fans are seen falling on each other. The VAR monitor broke during the fight. Pictures posted on social media showed injured fans.
A user sharing the video on Twitter wrote, “Where was the authority while everything was happening...violence in the Querétaro stadium. The match between #Queretaro and #Atlas was suspended. Reports say at least 15+ killed in Violence. #Mexico #Violence #Mexican #Football #queretarovsatlas #Violencia”
Another user shared, "WARNING! Video of graphic violence. This is not humane, it is barbarism. Mexico must be suspended from all international competition since it does not give security guarantees, this tragedy cannot be forgotten."
Also read: Autopsy reports clear the air over cricket legend’s death
World football's apex body FIFA, said in its statement, “FIFA is shocked at the tragic incident that took place at La Corregidora stadium in the city of Queretaro during the fixture between Queretaro and Atlas. The violence at the La Corregidora stadium was unacceptable and intolerable.”
"FIFA joins the Mexican Football Association and Concacaf in condemning this barbaric incident and encouraging the local authorities to bring swift justice to those responsible. Our thoughts are with all those who suffered its consequences.
"Once again, FIFA would like to stress that violence should have absolutely no place in football and we will continue working with all parties to eradicate it from our game,” FIFA added.