The tennis player accused a member of the ruling party's Standing Committee until 2018, of forcing her to have sex. 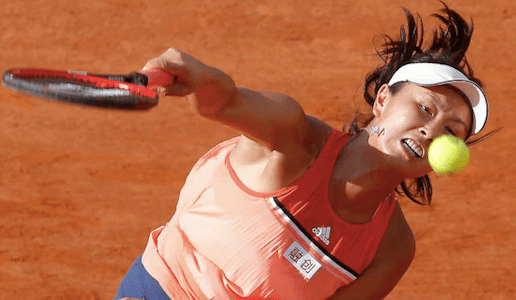 Peng Shuai, the Chinese tennis player who had abruptly vanished from the public view, concerning her fans and supporters, has finally reappeared.

According to photos released by the organiser, missing tennis star Peng Shuai reappeared in public on Sunday at a youth tournament in Beijing. After Peng accused a senior leader of sexual assault, the ruling Communist Party tried to calm international fears while suppressing information about her in China.

Peng's disappearance and accusation were not mentioned in the China Open's post on the Weibo social media service. Peng was seen waving and signing oversize commemorative tennis balls for children as she stood beside a court.

The appearance came after a steady stream of photos and videos showing a smiling Peng going about her daily life in Beijing surfaced on Twitter on Friday. All the videos and photographs were posted by staffers of Chinese government-controlled media and the state sports system on a platform blocked in China.

On Saturday, the editor of a party newspaper said that the three-time Olympian would "show up in public" soon.

Peng's disappearance, as well as the government's silence in response to queries, prompted calls for a boycott of the Winter Olympics, which will be held in Beijing in February and are a high-profile event for the Communist Party. Unless the former No. 1 doubles player's safety was guaranteed, the women's professional tour threatened to pull events out of China.

The discussion of Peng's accusation has been taken down from Chinese websites. On Friday, a government spokesman denied knowing about the uproar. The ruling party's Internet filters also prevent most Chinese citizens from accessing foreign social media and most international news outlets.

Peng joins a growing list of Chinese businesspeople, activists, and ordinary citizens who have vanished in recent years after criticising party leaders or participating in anti-corruption or pro-democracy or labour rights campaigns.

Peng "stayed in her own home freely" and would "show up in public and participate in some activities soon," according to Hu Xijin, editor of the party newspaper Global Times.

The former Wimbledon and Paris Open champion, this month had accused Zhang Gaoli, a member of the ruling party's Standing Committee until 2018, of forcing her to have sex. China appears to be attempting to defuse the situation without acknowledging her disappearance.