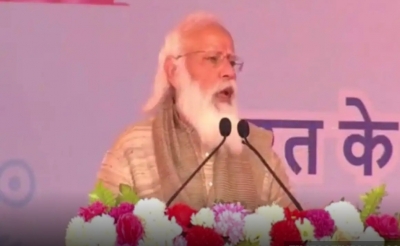 As the Prime Minister Narendra Modi on Saturday addressing the members of the Matua community in Gopalganj district following his visit to the Orakandi temple in Bangladesh, the Chief Minister Mamata Banerjee, who reportedly have a strong hold over the members of Matua community, targeted PM Modi's over his 2-day Bangladesh visit and termed it as ‘violation of the code of conduct of elections’.

Alleging PM Modi of violating election code, Mamata Banerjee said, "elections are underway here and he (PM) goes to Bangladesh and lectures on Bengal. It is a total violation of code of conduct of the election." Banerjee said while addressing a poll rally in Kharagpur.

In his speech, targeting Modi and BJP, she said the latter says that Mamata did infiltration by bringing people from Bangladesh, and now the PM himself is seeking votes (that too when the elections of first phase are underway) from Bangladesh.

She said the rules of Election Commission of India are for all other parties and their leaders, while the BJP has the power to do anything or anytime.

Meanwhile, just a few hours before, PM Modi tweeted: "Today, the phase 1 of the West Bengal Assembly elections began. I would request all those who are voters in the seats polling today to exercise their franchise in record numbers."

"The first phase of elections began in Assam. Urging those eligible to vote in record numbers. I particularly call upon my young friends to vote."