Modi-led govt bows down to Farmers protest, PM says failed to convince a section of farmers 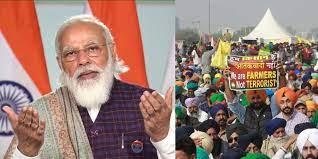 Today, on the auspicious day of Guru Nanak Dev Jayanti, Prime Minister Narendra Modi has made a big announcement. During his nation address, PM Modi said that the central government has decided to ‘repeal’ all three farm laws. PM Modi announced this big news before the completion of 1 year of farmer’s protest.

It is for the first time that the Modi government has bowed down in front of any decision taken in the parliament. PM Modi was adamant for nearly a year but now ahead of Punjab and UP assembly elections, the central government has decided to repel the three farm laws – Farmers’ Produce Trade and Commerce (Promotion and Facilitation) Act, Farmers (Empowerment and Protection) Agreement of Price Assurance and Farm Services Act, and Essential Commodities (Amendment) Act.

He also apologized for failing to convince a section of farmers. He added that the farm laws were made for the benefit of the farmers only and with true as well as noble thoughts. PM Modi said, “I apologize to India and with a true and pure heart that may be... we were not able to convince farmers (over the farm laws).”

He further assured that the laws would be completely taken back by the end of this month. “I'm here to declare that we have decided to repeal the three farm laws...We will complete all the formalities during the Parliament session that begins this month,” PM Narendra Modi said.

The farmers of our country were protesting at the borders of Delhi, it was one of India's longest and strongest agitations. The protesting farmers were tortured by police, crushed with vehicles of BJP politicians and witnessed violence despite a peaceful protest, the agitating farmers stood face to face to Modi government and demanded "black laws" to be repealed.

Farmers from Punjab arrived at the Singhu and Tikkri border on November 26, 2020, following a standoff with Haryana police and have been staying there ever since.

Facing severe heat, winters, heavy rains and thunderstorms, thousands of farmers demanding the repeal of farm laws passed by the government last year remain undeterred and continued their protests on the outskirts of the national capital.

But now, finally, the government has taken a step in favour of the protesting farmers.

During these long 11 months, many violent incidents took place, in some farmers broke through police barricades while in other police lathi-charged on them. One such incident was “Republic day Violence”.

At the beginning of the year 2021, violence broke out near the red fort in Delhi on the occasion of Republic day.

On January 26, farmers protesting against new agriculture laws in India broke through police barricades around the capital and entered the historic Red Fort in Delhi.

After hundreds of thousands of farmers marched on the capital on tractors or horses, police used batons and tear gas to disperse the crowds. During the clashes, one protester was reported dead, and hundreds of police and protesters were injured.

In several parts of Delhi, mobile internet connections were suspended, and some metro stations were also closed.