Reportedly, the youth was also taken to Mohali Phase 8 Police station by the 'suspended' Police officers and was again beaten there. 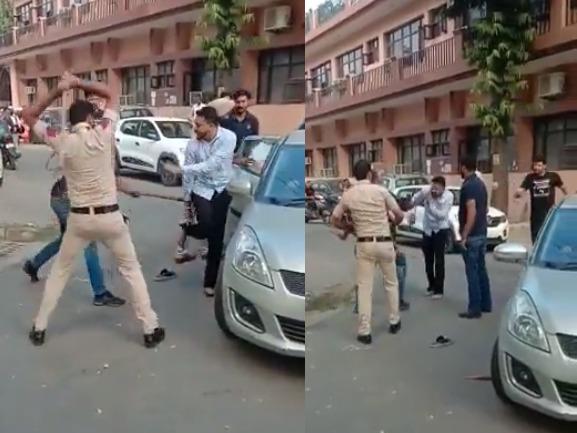 In a shocking incident, 2 Punjab Police personnel were suspended while a departmental inquiry was ordered on another after they were caught on camera mercilessly beating a youth on the streets of Mohali Phase 9. Reportedly, the youth was then taken to Mohali Phase 8 Police station by the 'suspended' Police officers and was again beaten there. Furthermore, the youth's two brothers who came for his release were also beaten. Now, Mohali Punjab Police beating video has been going viral on social media with netizens fuming over the authorities' brutality.

Youth beaten up brutally by Punjab Police personnel in Phase 8 of #Mohali, Both the police personnel has been suspended after registering a case. pic.twitter.com/yIwwhbHqIT

Firing in Amritsar: 2 youngsters try to kill a man working in a salon, captured on CCTV; details inside

The victim who is currently (while writing this) admitted into a hospital stated that he was watching a normal video in the area in a park. The victim stated that when he was coming out of the park while keeping his headphones on, he was stopped and the Police asked whether he has made any kind of video of them. The victim then reportedly handed over his phone to the policemen and asked them to check themselves as he did not make any videos. As per the victim, the Police threw his phone to the ground and started slapping him. After they started beating mercilessly, the victim's brother came to his rescue, however, they were also beaten by the Policemen. The victim further revealed that he was then taken to the Police station where he was locked for almost 4 hours and was also beaten there.

Reportedly, after the video went viral, officials came into action and sent a team to record the victim's statement in the hospital and also registered a case. The two policemen who were caught beating the youth were reportedly suspended, while a departmental inquiry was enforced against the third accused.