Money Heist season 5 part one starts on a breakneck pace. It is action-packed, heart thumping and unpredictable.

One year is a long time — long enough for a dreaded pandemic to spawn devastating variants, and for regimes to rise and fall. In the world of Money Heist though, the time has not just slowed down, it seems to be frozen. The bullets that were fired in the Spanish show’s season 4 will finally be finding their marks now. But the Netflix show more than makes up for the wait by delivering a lesson in shock and awe.

Money Heist doesn’t draw the curtains with its final season as much as it drops a rather heavy grenade and burns the whole thing down. The sexy gang in red jumps right into the action and doesn’t let it drop. You better be prepared for the ride because they are not going to make it easy with you. It is full throttle, baby.

Though the first two episodes don’t tell us much about the actual motive (one can only guess) of Alicia to come after the master planner, we do expect some big revelations going forward. The fact that women get a bigger pie of the series is already well established. Lisbon or “Mrs Professor” is now calling the shots. In fact, after watching the initial episodes of the show, I only remember its women – Lisbon, Tokyo, Stockholm, Manila, and definitely Alicia Sierra.

While Money Heist Season 5 delivered an interesting package of twists and turns, it ended on an emotional note with Tokyo's death.

Fans were disheartened with her death and expressed their emotions in a number of tweets. One Twitter user said, "Tokyo used to be selfish and reckless. But tonight, we saw a different version of her who thought about the group more than herself. Money Heist just surprises us every time but it fucking hurts." 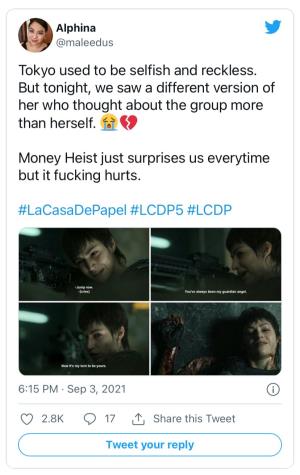 Another demanded a miniseries portraying Tokyo's past life. A fan tweeted, "Berlin, Nairobi, & Tokyo may forget how they lived, but their legacies will always be remembered." 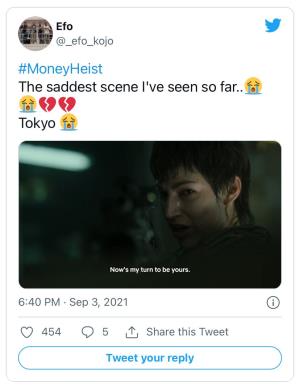