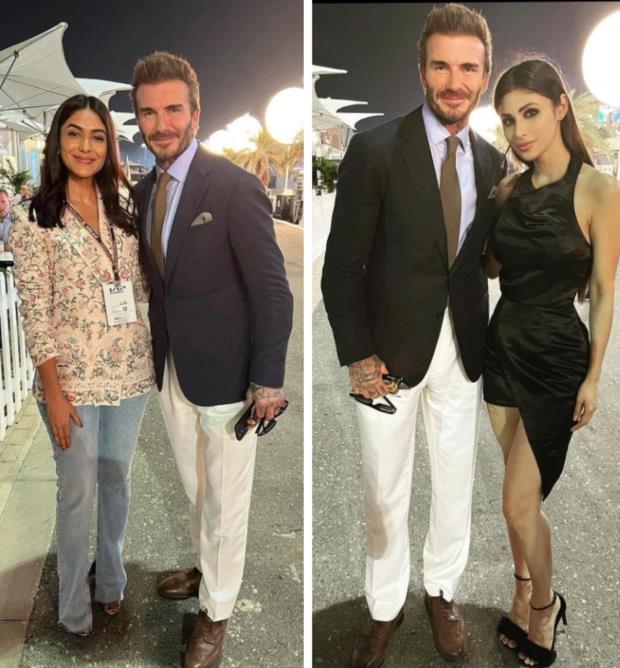 Mouni Roy is one lucky girl. When she is not starring in the biggest movie projects of the year, Mouni Roy is enjoying her glamorous, jet-setting life. This time around, the actress' love for travel took her to Doha, Qatar to attend Grand Prix 2021. And here, Mouni Roy had a total fangirl moment with none other than English footballer and all-around heartthrob David Beckham. Mouni Roy shared a post on Instagram in which she is seen standing next to the Manchester United legend as the two smiles for the camera. Sharing the image, the elated actress wrote, “What just happened,” tagging David Beckham and adding the hashtag, “best”.

It would not be incorrect to say it is good looks galore in one frame. While Mouni Roy looks stunning in a black dress, Beckham is dapper as always in his formal attire. Needless to say, fans and colleagues of the Naagin star rushed to the comment section to show some love and also register that they are a tad bit jealous of Mouni Roy. While Ranveer Singh replied with a fire emoji and wrote, “Ooo,” Anita Hassanandani said, “Woah”. Disha Parmar and Anusha Dandekar replied with heart-eye emojis.

And, Mouni Roy is not the only lucky star to score a photo with David Beckham. Actress Mrunal Thakur too clicked a picture with the football superstar. In addition to a full-length picture, Mrunal Thakur also managed to sneak in a selfie with David Beckham much to the delight of her fans and colleagues. In the caption, she wrote, "And this happened. Best night ever. Are you jealous?"

Summing up what most of Instagram felt when they saw the image first, actor Dulquer Salman said, “What the hell!” Asha Negi wrote, “Ok then.” Ranveer Singh commented, “Sex god”. While Kishwer M Rai wrote, “Super frikkin jealous,”  Amruta Khanvilkar also said, “Ok very very jealous. Post the picture session, Mouni Roy and Mrunal Thakur sat together and giggled like true fangirls about having met David Beckham. Sharing Instagram Stories in which the two are giggling, Mrunal Thakur said, “This is us after we click pictures with David Beckham. Are you jealous?” On the work front, Mouni Roy will be seen in the upcoming film Velle alongside Karan Deol and Abhay Deol. She also plays a pivotal role in the magnum opus Brahmastra with Ranbir Kapoor and Alia Bhatt.

Mrunal Thakur, meanwhile, is basking in all the praise coming her way for Dhamaka. She will be seen next in Jersey with Shahid Kapoor.