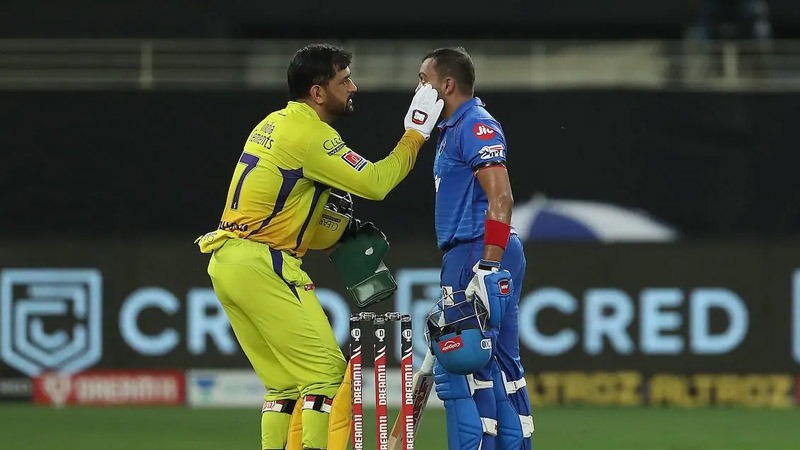 Chennai Super Kings captain Mahendra Singh Dhoni won hearts with wonderful gesture during his team's match against Delhi Capitals in IPL 2020 on Friday. Midway through the Delhi innings, Prithvi Shaw seemed to be struggling with something in his eye and Dhoni stepped up to help the young batsman with his troubles.

But, that was all after Dhoni gave the Capitals opener a life by failing to use DRS when replays showed that Shaw had knicked the ball in the very first over of the match. The DC batsman made use of the chance and went on to score 64 from 43 balls to help his team post 175 for 3 in 20 overs.

After being criticised for coming into bat too late against Rajasthan Royals (RR), Chennai Super Kings (CSK) skipper Mahendra Singh Dhoni promoted himself one spot, to No.6, against Delhi Capitals (DC) on Friday, but to no avail. The result for his team was the same: a comprehensive defeat.

Dhoni, who turned 39 in July, couldn't get going and at times failed to connect bat to ball as well. In fact, when he walked into bat after Kedar Jadhav's wicket which reduced Chennai to 98/4 in the 16th over, the asking rate was already looking almost insurmountable.

Dhoni could only managed a 12-ball 15 (2x4s) before wicket-keeper Rishabh Pant caught him off Kagiso Rabada. The DC bowlers, despite a couple of dropped catches, restricted a lacklustre CSK to 131/7 in 20 overs and emerged victorious by 44 runs.

"I don't think it was a good game for us. There was no dew, but the wicket did slow down. We are lacking a bit of steam in the batting and that hurts. The run rate keeps on mounting after such slow starts and adds pressure, we need to figure that out. We need to come back with a clearer picture, looking at the combination," said a disappointed Dhoni said during the post match presentation.

While it is true that Dhoni is master at chasing totals, with a calculative mind at work. He has done that many times. But Friday one of those days when even for a seasoned campaigner like him it was beyond his reach. The debate will now rage about Dhoni's decision of coming so low down the order, even at No.6. Will he come at No.4 or No.5 if the next time CSK chased a similar total? Only time will tell.

CSK, who are at times referred to as 'Dad's Army' for their 30-plus average age, now have two points from three matches, having won a solitary game, against Mumbai Indians. On the other hand, DC have won both their matches so far and are now on top of the points table with four points.