MVA collapse was triggered after the MLC elections following which an exodus was triggered in the Uddhav Thackeray-led Shiv Sena with rebel senior politician and Minister Eknath Shinde leading the faction. 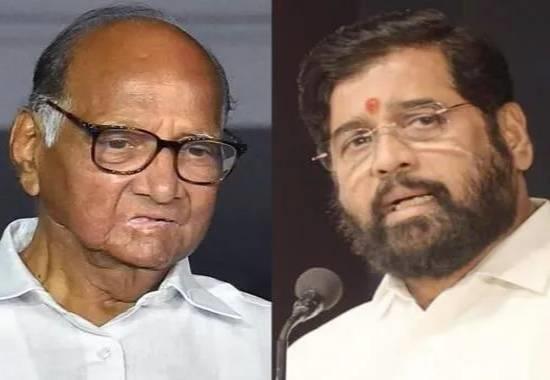 There might be a change in power in the Maharashtra state government as the MVA (Maha Vikas Aghadi) is on the verge of collapse. MVA collapse was triggered after the MLC elections. Following the MLC election, an exodus was triggered in the Uddhav Thackeray-led Shiv Sena with rebel senior politician and Minister Eknath Shinde leading the faction. With Maha Vikas Aghadi (MVA) government is running out of options with its numbers slipping below the majority mark, NCP Supremo Sharad Pawar reportedly offered the CM post to Eknath Shinde in order to save the MVA Collapse.
Eknath Shinde rejects Sharad Pawar's offer to be Maharashtra CM under MVA
Reportedly, Eknath Shinde rejected the offer to either take the Chief Minister post or even consider an alliance with the NCP and Congress. Shinde has led the faction and accused Uddhav Thackeray of compromising the ideology of Balasaheb Thackeray i.e. Hindutva by joining the alliance of the NCP and Congress. Earlier, with at least 38-40 MLAs, Shinde had reached Guwahati's Raddison Blu hotel. Speaking at the Surat airport before departing for Guwahati, the Maharashtra Minister had said, "We are Balasaheb's Shiv Sainiks. We have not left Shiv Sena and we will not leave Shiv Sena. But we are going to do the politics based on Balasaheb's ideology." Notably, as per anti-defection law, at least 37 Shiv Sena MLAs need to rebel in order to avoid the possibility of disqualification.
Uddhav Thackeray ready to resign as Maharashtra CM
Also Read: Explainer: Know what is going wrong in Maharashtra's politics? What is 'Operation Lotus'? Key points
Amidst the political turmoil, Uddhav Thackeray on Wednesday in his address stated that he is ready to resign. "We were in Opposition to the Congress and NCP for 25-30 years. But I am grateful that both Congress and NCP are supporting me today, they are saying we will stand by you. But it's my own people working with me for ages that are now questioning me. I am ready to resign as the Chief Minister and as the Shiv Sena chief if my own MLAs want it," said Udhav Thackeray.
Furthermore, 'emotional' Uddhav Thackeray said that there has been no compromise in the Hindutva ideology in the Shiv Sena and it is the same as it was during the time of Balasaheb Thackeray. "I don't know what I have done that people are questioning our Hindutva and what the change is between Balasaheb's Shiv Sena and mine. This is the same Shiv Sena that Balasaheb has taken ahead, the same Shiv Sena that fought and reached here," added Thackeray.