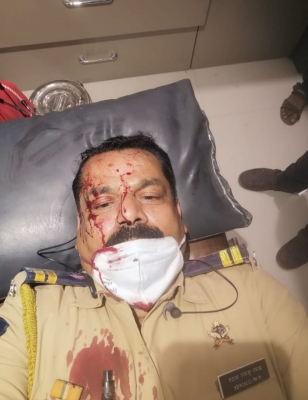 During Hola Mohalla celebrations at Huzur Sahib Gurudwara in Maharashtra, at least four policemen were injured when some sword-wielding Sikhs clashed with cops after they denied permission to hold a public procession outside the Gurudwara premises.

As per information received, a group of Sikhs wanted to enact the Holla Mohalla tradition by organising a public procession, however, the Nanded police owing to covid19 pandemic and the recent guidelines issued by the Maharashtra government declined the permission for the same.

The police ordered that the function may be held only inside the Gurudwara premises, but some angry Sikh youths allegedly stormed the Gurudwara gates, trooped outside flashing swords, raised slogans and indulged in a clash with the cops.

After that in the melee that ensued, at least four policemen were reportedly injured and several vehicles parked in the vicinity were damaged, including one belonging to a DSP.

Though the condition of the injured cops is said to be stable, the Wazirabad police in Maharashtra's Nanded district have registered three FIRs against 64 people and 17 persons have been arrested so far in connection with the incident.

The videos of the clashes have also gone viral on the social media sites that show how the sword-wielding Sikhs broke the barricades placed by the police and opened attack on the cops with their swords.

Meanwhile as per reports, the policemen thereafter contacted the gurudwara committee and they in return assured that they would follow the directives of the state government and would hold the event inside the gurudwara premises, said a police official on duty.

In addition, Nanded Sahib is an important Sikh pilgrimage centre that hosts Holla Mohalla celebrations every year. Scores of Sikh people from Maharashtra and other states visit this holy place to pay obeisance to the holy book Guru Granth Sahib.