Raising slogans against the BJP, they also condemned the detention of AICC general secretary Priyanka Gandhi Vadra in UP. 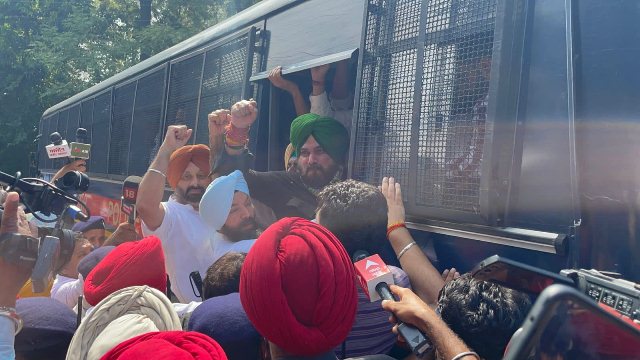 Former PPCC Chief Navjot Sidhu and some legislators of his party on Monday were detained by Chandigarh police after they held a protest outside the Punjab governor's residence in Chandigarh to extend their support to the farmers who were allegedly killed in Uttar Pradesh's Lakhimpur Kheri on Sunday.

Raising slogans against the BJP, they also condemned the detention of AICC general secretary Priyanka Gandhi Vadra in UP.

The Punjab government Civil Aviation Director had today urged the Uttar Pradesh government to allow CM Channi's chopper to land so that he can visit Lakhimpur Kheri, however, UP govt denied the permission saying saying section 144 has been imposed in Lakhimpur Kheri and in view of the situation; leaders cannot be permitted to proceed to the district.

Earlier, Punjab Deputy Chief Minister Sukhjinder Singh Randhawa too was denied permission to land at the Lucknow airport, and therefore he along with other Congress leaders decided to go to Uttar Pradesh by road.