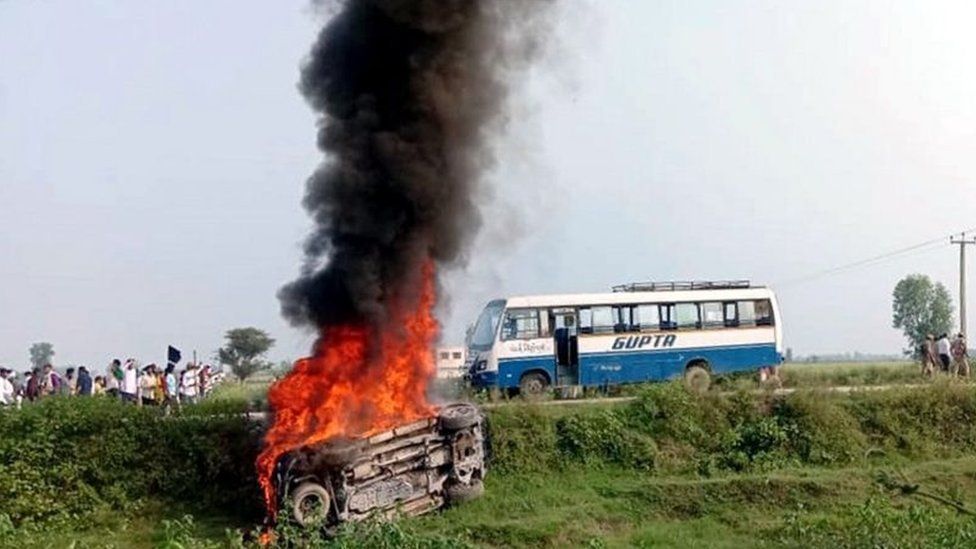 The tension in Lakhimpur Kheri in Uttar Pradesh grew after yesterday's violence that has by far killed 8 farmers after Union minutes Ajay Mishra's car ran over four farmers and the other four died in the clashes that took place thereafter.

Farmers are protesting against the Sunday violence in Lakhimpur Kheri. They have decided to cancel the protest from Ground Zero and cremate those who died after the government announced a large compensation for the dead and the injured.

Let's see the biggest developments in this matter by far.

2. Union Minister Ajay Mishra's son Ashish Mishra has been booked under murder case. The farmers in Lakhimpur alleged that he was driving the car and ran it over the protesters, which later triggered the violence. The protesters were agitating against the visit of Union Minister and Deputy Chief Minister Keshav Prasad Maurya in their area.

3. The farmers agreed to cremate the four dead bodies after a meeting with the police on Monday morning. These four died after coming under the speeding car of the leader. Many were injured.

4. The farmers of Lakhimpur have been ensured of an investigation based on the complaints registered by the deceased families.

5. Meanwhile, the violence at Lakhimpur Kheri has started a new political battle with Opposition parties trying to reach the families of the victims. Opposition leaders have been detained and stopped from reaching Lakhimpur. On the other hand, the Lucknow airport authority has been requested by the UP government not to permit Chhattisgarh Chief Minister Bhupesh Baghel and Punjab's Deputy Chief Minister Sukhjinder S Randhawa to arrive in the state. The BSP who has also been denied visiting rights has decided to wait out.

6. Congress leader Priyanka Gandhi Vadra has alleged being manhandled and pushed by the UP cops who was arrested on her way to Lakhimpur Kheri. She has been detained in a PAC guest room in Sitapur.

7. Questioning why she has been arrested when the accused minister’s son who killed innocent farmers is roaming free, the Congress leader asked the UP police officials who retained her.

8. The union minister Ajay Mishra whose son’s car ran over the protesting farmers has denied the allegations and said his son was not present on the site of the violence. "There were miscreants who attacked workers with sticks and swords," he said, asserting that a furious mob of protesters came over them that resulted in their vehicles turning over and this killed them.

9. The Supreme Court today was in ripples from the incident, where the farmers have sought permission from the court to carry out a protest in Delhi.

10. Attorney General KK Venugopal, who is representing the government, said, "There should be no further protests to prevent unfortunate incidents like the one in Lakhimpur Kheri yesterday". The top court has also questioned the farmers on why they are still protesting when the court has already put a halt to the three farm laws.