Navjot Sidhu warns Channi govt over appointment of DGP, AG, says ‘they must be replaced or we will have no face’

A day earlier on Gandhi Jayanti, Navjot Sidhu tweeted that he will make Punjab win despite efforts by all "negative forces" to defeat him.

Days after resigning as Punjab Congress President after being upset over some new faces in the state Cabinet and controversial appointments of DGP and AG, Navjot Singh Sidhu on Sunday once again made his stance clear over his resignation and said that the AG / DGP appointments rub salt on wounds of victims.

He reiterated his demand to replace AG Amar Preet Singh Deol and DGP Iqbal Preet Singh Sahota, while giving credence to the rumours that he is still unwilling to withdraw his resignation.

In a tweet, Sidhu said, “Demand for Justice in Sacrilege cases and for arrest of main culprits behind the drug trade brought our Govt in 2017 & Due to his failure, People removed the last CM. Now, AG / DG appointments rub salt on wounds of victims, they must be replaced or we will have No face!!”. 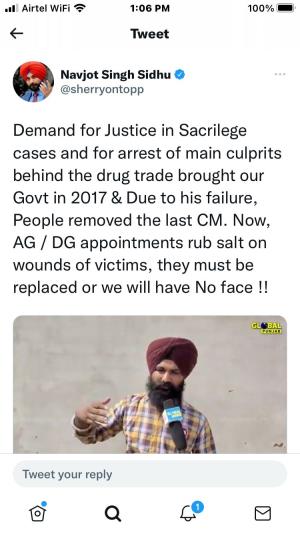 A day earlier on Gandhi Jayanti, Navjot Sidhu tweeted that he will make Punjab win despite efforts by all "negative forces" to defeat him.

He said whether he holds any post in the Congress or not, he will always stand by party leaders Rahul Gandhi and Priyanka Gandhi.

"Post or No Post will stand by Rahul Gandhi and Priyanka Gandhi! Let all negative forces try to defeat me, but with every ounce of positive energy will make Punjab win, Punjabiyat (Universal Brotherhood) win & every Punjabi win!!", he tweeted.

Sidhu has accused Sahota of giving a clean chit to the Badals and Baba Ram Rahim of Dera Sacha Sauda in the sacrilege charges when he was in charge of a Special Investigation Team (SIT) set up by the Badal-led-SAD government in 2015.

His objection to APS Deol as Attorney General is that he has represented former DGP Sumedh Singh Saini and secured bail for him in several cases. Meanwhile, cabinet minister Rana Gurjit Singh was allegedly involved in a mining scandal. Thus, Sidhu and his aides want him sacked and want to include a clean Dalit face given the upcoming polls.