Navjot Sidhu’s poster in on Punjab Congress Headquarter, Captain’s out

There used to be a poster of Punjab CM Captain Amarinder Singh here, but Sidhu supporters have changed it overnight 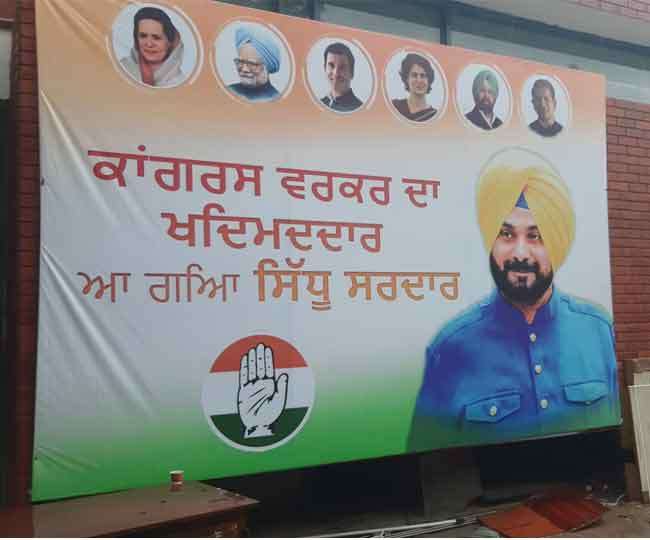 With the announcement of Navjot Singh Sidhu as the state president by the Congress high command, the appearance of the Punjab Congress headquarters in Chandigarh has also started changing. There used to be a poster of Punjab CM Captain Amarinder Singh here, but Sidhu supporters have changed it overnight and put up a poster of Navjot Singh Sidhu here.

Even the old Congressmen were not in favor of giving the post of state president to Sidhu, but the Congress high command, regardless of this, handed over the command of the party's state president to Navjot Singh Sidhu last night. However, four executive heads have also been appointed to tighten the noose on Sidhu.

Even when Sidhu left the BJP and joined the Congress, Captain he was not in favor of bringing Sidhu into the party. The first year was fine between Sidhu and Captain.

The captain gave Sidhu a place in his cabinet and made him the local body minister. Shortly afterwards, the captain reshuffled his cabinet. Sidhu was given the power department instead of the local body, but Sidhu did not agree to it and resigned from the cabinet.

Sidhu remained silent for a long time after the captain resigned from the cabinet. But in the meantime earlier this year he suddenly became active. Through internet media, Sidhu started targeting Captain Amarinder Singh. After this, the anti-captain faction started intensifying its rhetoric.

The Congress high command had to hold meetings to quell the growing discontent in the party. Yet Sidhu remained aggressive on the captain. Now the high command has handed over the command of the state president to Sidhu. It will be interesting to see what chemistry Sidhu-Captain has in the election year.