‘Neither do I have a wife named Noor nor a 17-year-old daughter lives in Dubai’: Salman’s clarification on trolling 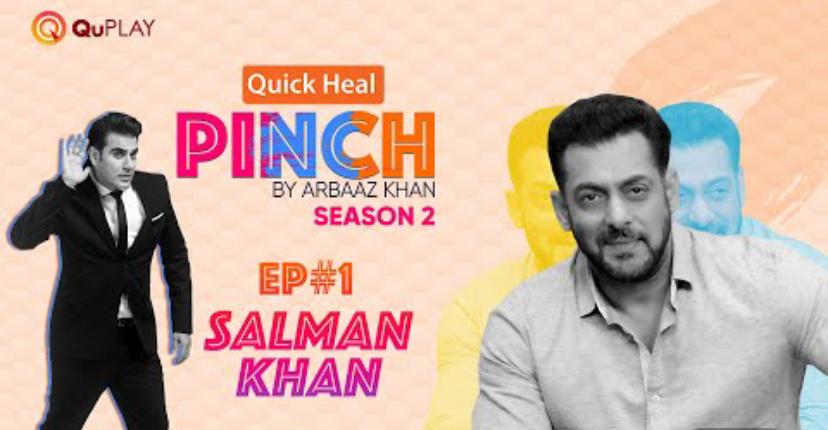 ‘Quick Heal Pinch by Arbaaz Khan’ Season 2 will have Salman Khan as the first guest. Arbaaz shares, “This time the season opener is going to be Salman, this is something we had pre decided. Last season we consciously didn't have him on the show for the simple reason that being his brother and since I was hosting for the first time I wanted to do a kind of show where I wanted him to be convinced that it's going to be something that he would be happy to be a part of."

He says, "At that time, I felt if we ever had to go into a season 2, he would be like an ace for that season. Fortunately season 1 was well received. He saw it and really liked it and now he was more willing to be a part of this show than to be here just because I happened to be hosting it. It feels really good that he has come on board on the basis of really liking what he saw earlier."

In 'Pinch 2', Arbaaz Khan questions the guest on the tweets made on social media according to the format of the show. There are many trolls in them too. Arbaaz did the same with Salman Khan. During this, in a funny tweet, the user claimed that Salman Khan is married and his secret family lives in Dubai, which also has a 17-year-old daughter. 'Bhaijaan' Salman, who came as a guest, also gave a funny answer to this. On the occasion of Bakrid of Salman Khan, tweeting the link of this episode on Wednesday, has also given Idi to the fans.

Salman Khan was also shocked to hear the claim, when Salman Khan heard this, he was also speechless. He asked who it was about. On this Arbaaz said that it is about you. In response to this, Salman Khan said, 'These people have a lot of information. These are all bullshit things. I don't know who he is talking about and why he posted this. Does this man really think that I will not say anything on this?'

Salman further says, 'Brother, I don't have a wife. I live in India. I've been living in a Galaxy apartment since I was 9 years old. I would not like to comment on this man's claim, the whole country knows where I live. In this episode, Arbaaz further read out another user's tweet, which said that Salman Khan's house is a den of debauchery. In response to this, Salman said, 'What did you see in my house that you started thinking this as a den of debauchery.'

The show streams on Zee5 and QuPlayYouTube.