The film is set to release on Netflix on December 10. 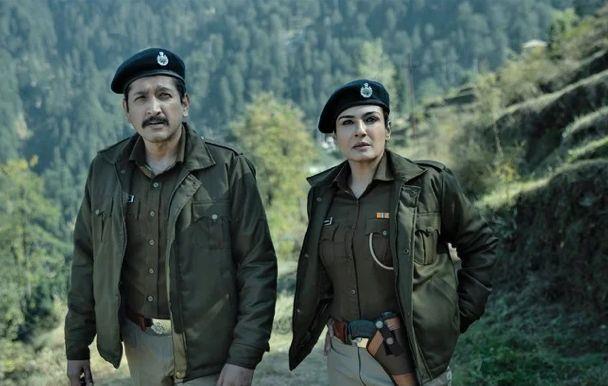 Raveena Tandon is all set to make her OTT debut with the web show Aranyak. On Monday, the streaming platform dropped the trailer of the show, which will leave you curious about the drama.

The two minutes-long trailer shows Raveena in a police uniform as she is ready to be replaced by another police officer in the hilly town of Sironah. A woman reports to the police about her missing daughter and boyfriend who have disappeared amid mysterious circumstances.

The series delves deep into the hardships of women police as they try to balance their personal and professional lives. Tandon, who will be seen playing a cop named Kasturi Dogra, seems to be the show stealer, assuming from the actress’ excitement.

Raveena said that she was attracted to the project because her character was a "fiercely independent" talented officer waiting for an opportunity to excel in her life. "She's surrounded by her male counterparts, wants to achieve something in her career and the way we women juggle our career, lives, emotional support that we get or don't get from home. Our priorities are our children, in-laws, family, that's what completely attracted me to her character. A lot of women can identify with that, especially our women in uniform," Raveena said during an interview.

While Raveena stands out as the woman who has given it all to her career, and is about to lose the biggest case of her life. Parambrata too manages to shine. There’s also a glimpse of Ashutosh Rana, Meghna Malik, Indraneil Sengupta and Zakir Hussain.

Sharing the trailer on Instagram, Raveena wrote,“Ek gunaah, aur itne saare gunegaar. Kya SHO Kasturi pata laga paayegi kaun sach bol raha hai, aur kaun jhoot? Sironah ke sach ke liye taiyaar rahiye, watch Aranyak on 10th December. Only on Netflix. #Aranyak #AranyakOnNetflix (One crime and so many criminals. Will SHO Kasturi be able to find out who is speaking the truth and who is lying? Be ready to find out the truth about Sironah).”

The movie has been co-produced by Siddharth Roy Kapur’s Roy Kapur Films.