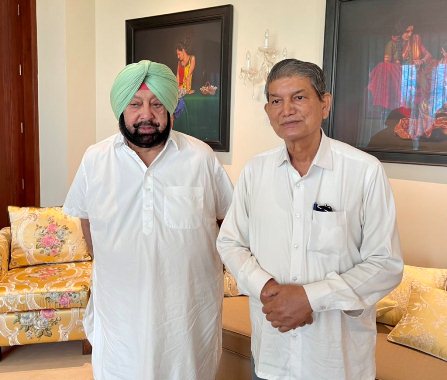 The Punjab Congress president's dilemma is likely to be resolved soon. Punjab Congress in-charge Harish Rawat had a long meeting with Chief Minister Capt Amarinder Singh at his Siswan Farmhouse on Saturday.

After the meeting, Rawat said that he will not give any breaking today adding that the Punjab CM had made a statement that every decision of the party high command will be acceptable to him.

Divulging insights of the meeting, Media Advisor to Punjab CM Capt Amarinder Singh on his twitter handle, quoting the CM, said, “Had a fruitful meeting with Harish Rawat. Reiterated that any decision of INC president will be acceptable to all. Raised certain issues which he said he’ll take up with the INC president”.

It is believed that the captain may have laid down some of his conditions before Harish Rawat and those conditions will be accepted by the party high command.  It remains to be seen when Navjot Singh Sidhu will be formally announced as President.

Besides, another problem ahead of the Punjab CM will be now cabinet reshuffle as many leaders have already announced mass resignation if any of their ministers will be left out.

It may be recalled that a Punjab government helicopter had gone to Delhi to pick up Harish Rawat, in-charge of Punjab Congress. On the other hand, former minister Navjot Singh Sidhu visited Punjab Congress Committee President Sunil Jakhar at his residence in Panchkula. The closed-door meeting between the two leaders lasted about 45 minutes. The two came out smiling and hugging.

On this occasion, Sidhu said that ‘our pair will be a hit and will be fit. Jakhar will always be my guide’.