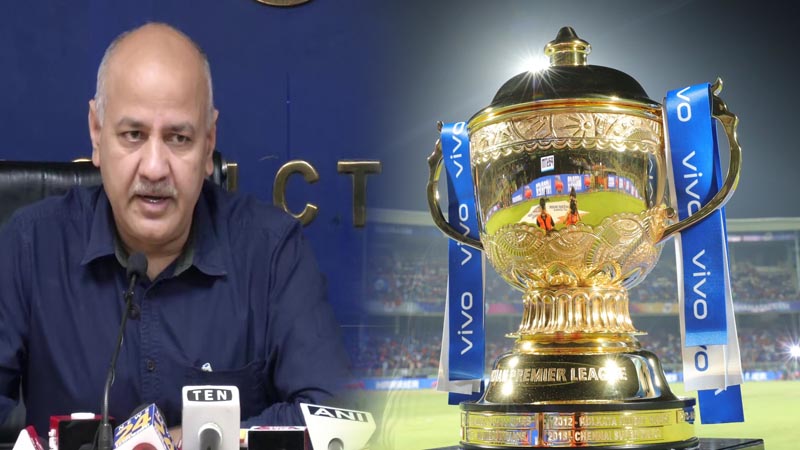 Delhi Deputy Chief Minister Manish Sisodia on Friday made it clear that no sporting activity will take place in the national capital, including the upcoming edition of the Indian Premier League (IPL), due to the ongoing coronavirus outbreak.

Addressing a press conference, Sisodia said: "We have decided to ban any sports activity where people will gather in huge numbers like the IPL. Social distancing is important to curb the breakout of coronavirus."

In its order, the Delhi government said: "In exercise of the powers conferred by the Delhi Epidemic Diseases, COVID-19, Regulations, 2020 under the Epidemic Diseases Act 1987, it is hereby directed that sports gathering (including IPL)/conferences/seminars beyond 200 people are prohibited in NCT of Delhi for the purpose of prevention and control of the outbreak of epidemic disease namely COVID-19."

Welcoming the order, AAP MP Sanjay Singh said: "It is the need of the hour and we welcome the decision as you cannot have such mass gatherings at this point in time. You cannot decide who has the virus and it is best to avoid the situation."

Clouds have been hovering over the IPL 2020 in the wake of the coronavirus outbreak which has infected 75 people in India so far and has resulted in death of one person in Karnataka.

The Sports Ministry has already made it very clear to the Board of Control for Cricket in India (BCCI) along with other national federations that any event that has to be held amid the coronavirus outbreak will have to be behind closed doors.

Speaking to IANS, Union Sports Secretary Radhey Shyam Julaniya said on Thursday that if a sports event is unavoidable and has to be organised, it should be done ensuring there is no public gathering.

"All national federations, including the BCCI, have been told to adhere to the guidelines and advisory issued by the ministry of health and public welfare. We have also told them to avoid any public gathering and if a sporting event has to be organised, it should be done without gathering of people.

"It is the state government who has to manage the crowd and who have the power under the epidemic diseases act (Epidemic Act of 1897). If it is unavoidable and it has to be organised, then they should do it without collecting the crowd," he pointed.

The central government on Wednesday suspended all visas, barring a few categories like diplomatic and employment, in an attempt to prevent the spread of coronavirus

All the eight franchises have already said that they are okay with the idea of the IPL being held with empty stands. But they wish for their foreign players to be made available from the start of the season.

As per an official of one of the franchises said that with the government making its stance clear and the World Health Organisation (WHO) declaring the coronavirus outbreak a "pandemic", there is no other option than to play the match behind closed doors.

"See, the gate money is no issue as these things are insured. As for the fans, it is disappointing, but we don't really have much of an option as we have to abide by the diktat of the central government and even WHO has declared the outbreak a "pandemic".

Get the latest update about IPL Match In Delhi, check out more about No IPL match In Delhi, IPL 2020, Delhi Deputy CM Manish Sisodia & Sports News