November Week 4 OTT Release: From 'Khakee... to Wednesday' a look at some top shows on web space this week 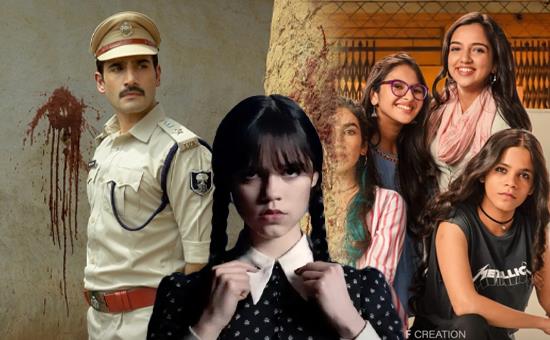 The last week of November is loaded with some intriguing shows on the web space that will provide guaranteed entertainment with the best of drama, thrill, and mystical fantasies.

Shows are returning with brand new seasons while a few are making their first presence on the web space. From Karan Tucker’s thrilling series based on the real-life scenario of Bihar to NASA’s Mars Rover fascinating Documentary this week has touched multiple genres.

In the thrilling drama series, Wednesday played by Jenna Ortega will be seen fighting a monstrous creature, will save the town, solving the supernatural mystery involving her family, and navigating all the new relationship that comes her way.

The Netflix creation series will have a total of 8 episodes and is set to release on November 23rd. The series is a co-production of some big names on board Alfred Gough, Miles Millar, Tim Burton, Gail Berman, Kayla Alpert, Steve Stark, Jonathan Glickman, and Andrew Mittman.

The makers as present the story of anarchy and conflict that changed Bihar forever. Inspired by the true story of how Bihar’s most dangerous criminal was caught, Khakee: The Bihar Chapter follows the epic tussle between two men on opposite sides of the law.

A Neeraj Pandey creation presents the likes of Karan Tacker, Avinash Tiwary, Ashutosh Rana, Jatin Sarna, Nikita Dutta, and Ravi Kishan among others in the lead will hit on global OTT giant Netflix on the 25th of November.

Wednesday OTT Release Date: When & where to watch the mystical comedy series on the web space

In the third season, Fikile learns more about her family and ancestry. Characters of Ama Qamata and Khosi Ngema proceed on a new journey, and on the way, they go on to explore many new learnings and present and will cherish you up with what went in the previous seasons. Releasing on the 25th on Netflix.

A star-studded cast formed by the likes of Ahsaas Channa, Srishti Shrivastava, Parul Gulati, Simran Natekar, and Trupti Khamkar among others returns to amuse you yet again with the happenings in the girl’s hostel and entertain as they did in the previous seasons. In season 3, the audience will witness more drama, challenges, and interesting twists and turns as the girls come together with a deepened bond and are ready to take on anything that comes their way. Releasing on the 25th on Sony LIV.

An incredible documentary is also lined up ahead this week that presents the story of the Mars Exploration Rover that was sent to Mars for a 90-day mission, and ultimately explored the Red Planet for nearly 15 years.

The rover sent on the mission was affectionately dubbed Oppy by her creators and scientists at NASA. See what challenges were encountered with all those involved and how this was managed over the entire course of the mission in the Ryan White creation releasing on the 23rd of November on Disney Plus Hotstar.