New Zealand pacer Mitchell McClenaghan used the phrase “meaningless series” to respond to an Indian fan who taunted the team for losing ongoing series against India. 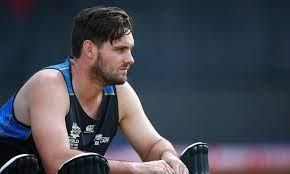 New Zealand all-rounder Mitchell McClenaghan in his latest tweet said that ongoing India vs New Zealand series is ‘meaningless’ as the Kiwis were cramped in a series just 72 hours after a defeat in World Cup T20I.

India is leading the series by 2-0 after winning the match against New Zealand by seven wickets on Friday. After this win, excited Indian fans started taunting the players. A tweet that read, “New Zealand lost the series,” forced Kiwi pacer to write use the phrase “meaningless series”.

Mitchell McClenaghan wrote, “Did they? You mean in meaningless series 72 hours after a WC final defeat with 3 games in 5 days playing a team with 10 days rest in their home conditions?”

However, the cricketer later said that he was joking and would have loved it if New Zealand won the three-match series against India. “I’m just joking around if love them to have won the series haha,” tweeted the player.

Cricketer also paid tribute to legendary cricketer AB de Villiers, who has recently announced retirement from all forms of the game.

The final T20I match will be played in Kolkata on Sunday (November 21).