Donovan Lewis, 20, died on Tuesday after being shot by Police Officer Ricky Anderson, a 30-year veteran with the Columbus Division of Police assigned to the K9 unit. 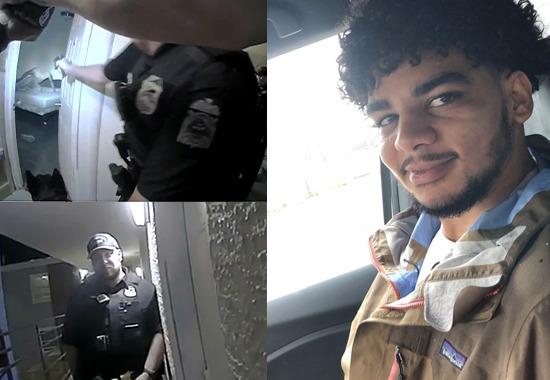 In the viral Columbus Police body-cam video, it can be seen two to three Police officers knocking at the door and calling the person inside. However, when no answer came, the Policemen opened the door and left their hunting dog (German Shephard) inside the house in order to sense any danger. Furthermore, the video shows, that the Police said to keep their hands upon seeing a man inside the house. While one of the men were arrested, the Police then opened a bedroom in which the 20-year-old man was sleeping. At first, the Police sent the dog first inside the bedroom, however, the moment they opened the door fully, one of the Policemen shot straight at him. Lewis was taken to a nearby hospital, where he was pronounced dead.

Those wondering under what accusation or charges, the Police were searching for him, here is the reason- uniformed officers were serving a felony warrant for domestic violence and assault and improper handling of a firearm.

(CW: Police Shooting)
This is a censored version of bodycam footage from a COLUMBUS, Ohio late night warrant where police shot and killed another unarmed man that was in his bed asleep. After the fact police claim Donovan Lewis "may have had a vape pen" whatever that means.

Rex Elliott, an attorney for Lewis' family, in a press conference on Thursday, stated that Devon was fully cooperating and there was no justification for the officer to shoot."Donovan was unarmed, and he was abiding by police commands to come out of his room when he was shot in cold blood by Officer Anderson," he said.

It is pertinent to mention here that the shooting is under investigation by the Ohio Bureau of Criminal Investigation, and Anderson has been sent on leave, Columbus Police Chief Elaine Bryant said as quoted by multiple US media.