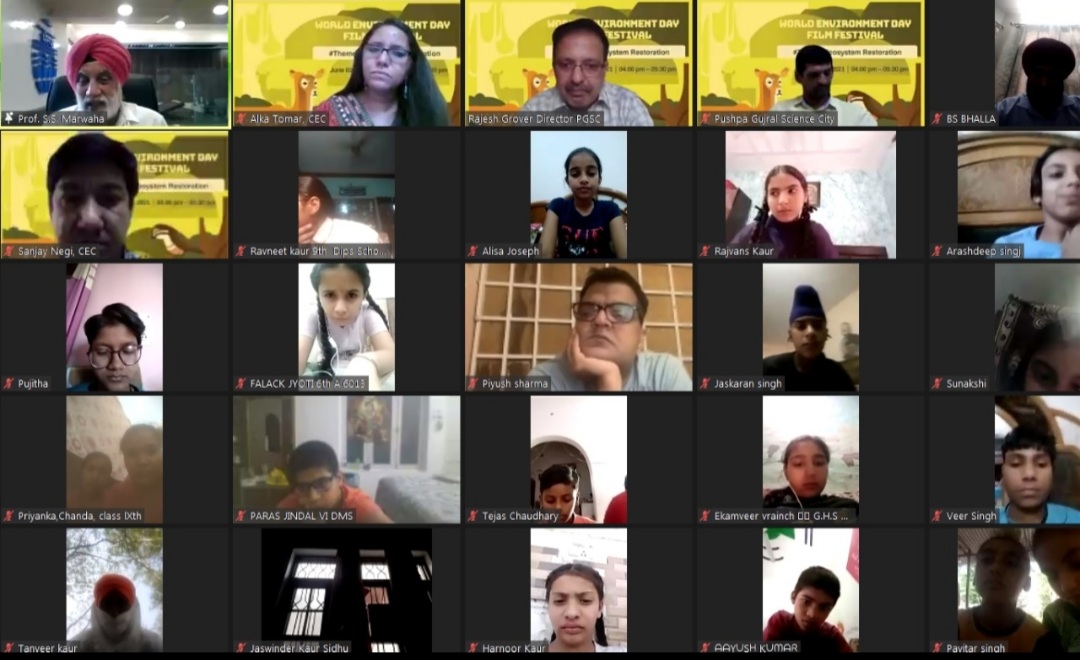 Dr. S.S Marwaha, Chairman, Punjab Pollution Control Board was the Chief Guest at the occasion.

He said that it has become more important to conserve the nature to restore our ecosystem when the entire world is fighting the pandemic COVID-19. He stressed on the need to improve quality of air and water as industries were not the only source of pollution but also the domestic waste was equally contributing to the pollution.

He  also launched the Environmental film festival at this occasion wherein a film titled “A Second Hand Life” highlighting the plight of young children involved in collection of e-waste was screened. The film highlights not only the plight of children involved in e-waste management which deprives them of their childhood but they are exposed to risks associated with contracting dreadful diseases.

The filmmaker Piyush Sharma who was also present at this occasion interacted and shared important incidents that prompted them to make this film. The session was moderated by Ms. Alka Tomar, President, Centre for Environment Communication.

Dr. Neelima Jerath Director General Science City during her introductory remarks said that human actions including deforestation, encroachment on wildlife habitats, intensified agriculture and acceleration of climate change have pushed nature beyond its limit. She highlighted that ecosystem restoration is impossible without biodiversity conservation because ecosystems can’t function properly without it. Many species in the world are endangered or even critically endangered and many more still are vulnerable.

Biodiversity loss is a great threat to the goal of ecosystem restoration. She said that if we continue on this path, it will have severe implications for humanity, including the collapse of food and health systems. She highlighted that even though the use of electronics in our lives has increased considerably but e-waste management is an area which has still not received full attention and users of electronics are not aware of the hazards of this waste, she added.

Dr. Rajesh Grover, Director, Science City present at the occasion said that restoring ecosystems can play a major role in controlling further global warming and climate change which in return will help in mitigating climate change. He urged the participants to adopt simple things viz  saving water, shifting to renewable forms of energy, saying no to single-use plastics, Reduce, Reuse and Recycle as much as  they can do on individual level to help Restore Ecosystem.