‘Only jumlas no vaccine’: Rahul Gandhi slams centre on shortage of covid vaccine

Other states such as Delhi, Madhya Pradesh, Maharashtra and Odisha are also experiencing shortages in COVID-19 vaccines. 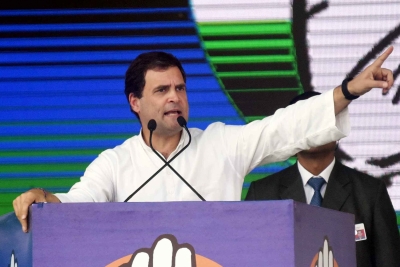 Congress leader Rahul Gandhi hit out at the Central government over the shortage of COVID-19 vaccines, saying that the government only give blank speeches and no vaccines.

Taking to Twitter, Rahul Gandhi shared a newspaper clipping highlighting that states are complaining about vaccines shortages while the centre is claiming sufficient stock. "Only jumlas, no vaccines," tweeted Rahul Gandhi.

The country had just recovered from a period of vaccine shortage with the implementation of the Centre's new free universal vaccination policy. An average of 61.14 lakh vaccine doses were given across the country between June 21 to 27, as per the Centre's Co-Win portal. However, between July 5 to 11, the daily average doses plummeted to 34.32 lakh.

Other states such as Delhi, Madhya Pradesh, Maharashtra and Odisha are also experiencing shortages in COVID-19 vaccines.

Lav Agarwal, Joint Secretary of Union Health Ministry informed that a further surge in cases is being noted in some states, like Manipur, Mizoram, Tripura and Arunachal Pradesh. He also noted that there are some states, where cases have come down but are still being witnessed in the form of the plateau.

Also Read: Earn by selling old currency notes online. Here's how you can

"We would like to request to everyone, when we talk about the third wave (of COVID-19), we are taking it as a weather update and not understanding its seriousness and our responsibilities associated with it," he said.