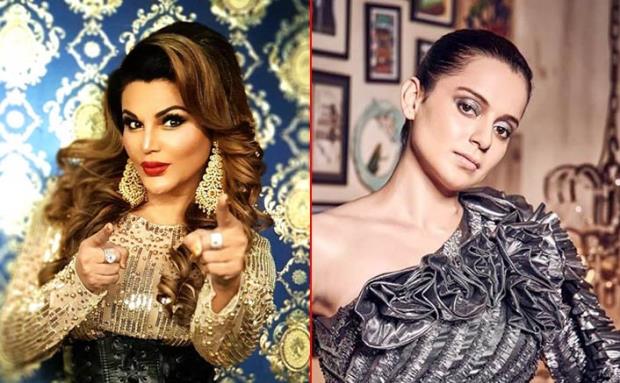 ‘Bigg Boss 14’ finalist Rakhi Sawant, also known as controversy queen, has been declared ‘national crush’ by her fans after she dropped a doctored video of Kangana Ranaut on social media. Rakhi posted a funny video in which Kangana can be seen speaking on a mic, after her remark on India’s Independence in 1947.

Rakhi Sawant took to Instagram and shared an edited video in which Kangana can be seen speaking, however, dogs barking is being heard instead of her voice in the clip. Sharing the video, she wrote, “Desh ki Gaddar hai didi”. In no time, with hundreds of people commenting on it, the video became a new ‘meme material’. Rakhi’s fans praised her for speaking against Kangana.

A number of people dropped fire and laughing emojis under the post. One of the fans commented, “Respect for you Rakhi,” while another mentioned, “Aaj Rakhi Sawant hm sbki national crush.” One user wrote, “OMGGGG QUEEN OF MEMES RAKHI JI !! Love it.” Meanwhile, one user dropped a comment while praising Rakhi for taking a stand, he wrote, “Only rakhi can stand against them go onnnnnn.”

Now the latest is that Rakhi Sawant has posted a video in which she has slammed Kangana for all the controversies lately. In the 5 minutes long video, Rakhi has badly thrashed Kangana and has used words like Bhikh mangi (Begger), lombdi (Fox) for her.

However, a section of people tried to defend Kangana. One of them wrote, “That’s not a way no very wrong we should take inspiration from her how much she achieved in this age, 4 national awards recently Padmasree award proud of her.” Another wrote, “This is totally pathetic…rakhi why the hell u doing this, this is ridiculous….Entire Bollywood is jealous of her and you to rakhi…this is shameful d act u did.”

For the unversed, Kangana Ranaut's views on "real freedom" have caused quite a stir. Kangana had reportedly said, “Freedom got through begging, is not real freedom. We achieved real freedom in 2014.” Later, she clarified and said that she didn’t disrespect any freedom fighters and martyrs.

Kangana Ranaut has defended her Independence Day comment and said that she has not disrespected freedom fighters and martyrs. She stated that if her statement regarding freedom is proven to be incorrect, she will return her Padma Shri.