Apart from Chinese engineers, a paramilitary soldier and another local were also killed. An investigation is underway and more details are awaited. 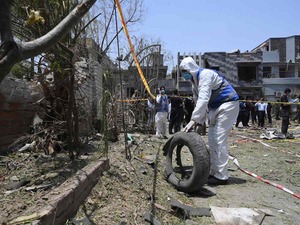 At least eight persons have died in an IED blast in the Hazara region of northern Pakistan on Wednesday. A major terror strike targeted a bus carrying Chinese engineers and Pakistani soldiers. Several others have been injured and are in critical condition. According to reports, the toll may rise further.

The Chinese engineers, four among whom have been killed, were working on the Dasu Dam in Upper Kohistan. There were 30 engineers and workers on the bus which was attacked. It was not immediately clear whether the IED device was planted in the bus or on a roadside.

“The bus plunged into a deep ravine after the blast and caused heavy losses. One Chinese engineer and one soldier are missing. The rescue operation is launched and the entire government machinery has been mobilised to rescue the injured by air ambulance,” a senior administrative officer told.

Apart from Chinese engineers, a paramilitary soldier and another local were also killed. An investigation is underway and more details are awaited.