Hasan, in Pakistan vs Australia match dropped the crucial catch of Matthew Wade which led to the team's exit in ICC T20 men’s world cup 2021. 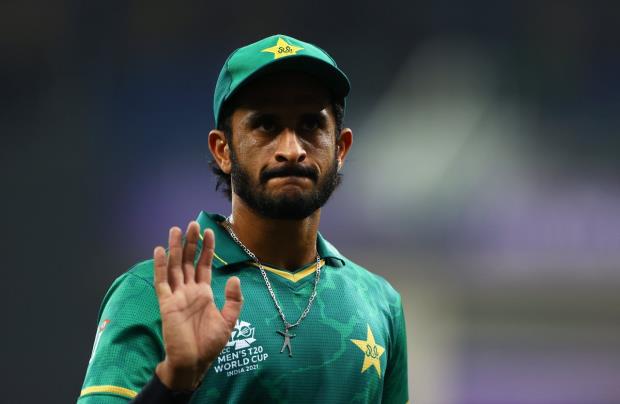 Pakistan pacer Hasan Ali has been dubbed the "villain" after his team lost to Australia by five wickets in Thursday's (November 11) ICC T20 World Cup 2021 semifinal in Dubai. In the 19th over of the match, Hasan dropped the crucial catch of Australian hero Matthew Wade off Shaheen Shah Afridi, costing Babar Azam's side in the match.

Australia needed 22 runs off two overs to win. Pakistani pacer Shaheen Afridi took possession of the ball. Matthew Wade smacked a shot towards mid-wicket on the third ball, which was not well-timed. Hasan Ali let go of the catch, which passed through his hands.

Following this, the Pakistan fast bowler has been viciously trolled on social media since last night.

"He's a Shia. And that's why he dropped the catch," said some. Pakistan holds a majority of Sunni Muslims and Shia's are minority constituting just 10-15% of the total population.

Others also pointed at his wife Samiya Arzoo, who is Indian. They went on to claim that Ali 'fixed' the match because he was married to an Indian woman.

Hassan's wife Samiya Arzoo is an aeronautical engineer by training. The two got married in a grand ceremony in Dubai in 2019.

Samiya is from the village of Chandeni in the Palwal district of Haryana. Her father, Liaquat Ali is a retired Haryana government Block Development Officer.

Meanwhile, Babar in the press conference after the match loss backedHasan saying, "I don't feel like that. Hasan Ali is our main bowler and has won many matches for Pakistan. Players do drop catches sometimes. He is fighting it out and I will continue to support him."