Pargat Singh questions the decision of AAP for nominating Sanjeev Arora as Rajya Sabha candidate; calls him a tainted businessman

Congress MLA Pargat Singh asked Kejriwal and Bhagwant Mann to do an inquiry on the Business of Sanjeev Arora; claims that it is the betrayal of Punjab mandate 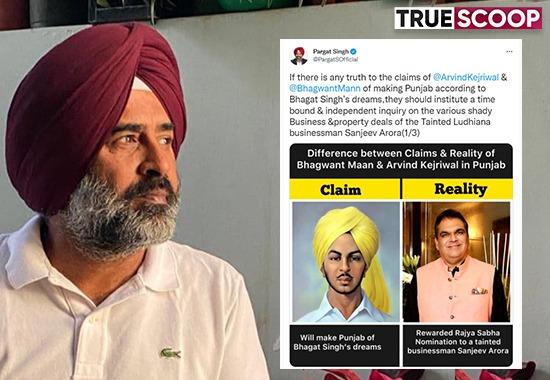 After Aam Aadmi Party has announced the five names for the Rajya Sabha members from Punjab, the party is surrounded by multiple controversies. The opposition parties are questioning the decision of Arvind Kejriwal and CM Bhagwant Mann for choosing these billionaires as Aam Aadmi faces.

Today Ex-Education Minster of Punjab Pargat Singh twitted and questioned Aam Aadmi Party for choosing Sanjeev Arora as Rajya Sabha candidate. He called him a tainted businessman.
In his tweet, he wrote, “If there is any truth to the claims of @ArvindKejriwal &  @BhagwantMann of making Punjab according to Bhagat Singh’s dreams, they should institute a time-bound & independent inquiry on the various shady Business &property deals of the Tainted Ludhiana businessman Sanjeev Arora.”
He also posted a picture with the tweet, indicating the difference between the claim & reality of Bhagwant Mann & Arvind Kejriwal in Punjab. He further tweeted, “Sanjeev Arora has been rewarded with a Rajya Sabha nomination from Punjab. They should also introspect about sending two non Punjabis to Rajya Sabha to represent Punjab.”
Also read: Aam Aadmi Party’s action mode in Punjab: Raid in Jalandhar Improvement Trust; department officials under interrogation

There is no reaction by any party member of AAP yet. The other big names nominated for Rajya Sabha are Harbhajan Singh, Ashok Mittal, Raghav Chadha, and Sandeep Pathak. Aam Aadmi Party has formed its government in the state by winning 92 seats out of 117.