BJP government will request the Rajya Sabha to suspend Mr. Sen for his unacceptable behaviour with Electronics and Information Technology minister Ashwini Vaishnaw. 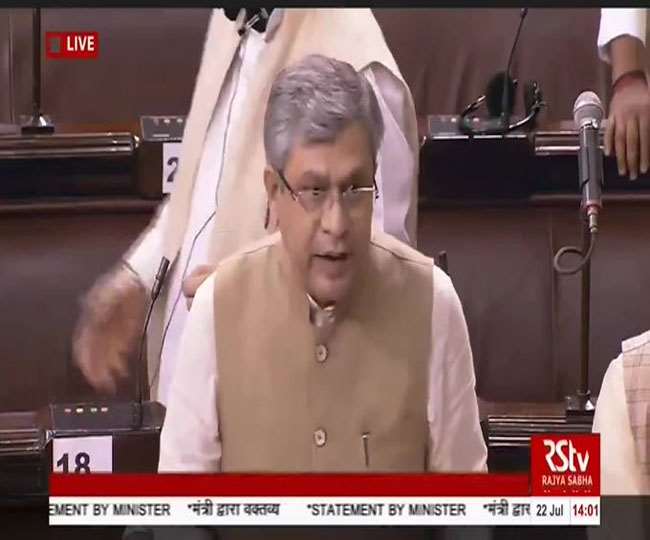 A huge uproar was seen in the Lok Sabha and Rajya Sabha on the third consecutive day of the Parliament Monsoon Session. On Thursday, July 22 TMC MP snatched the statement from Electronics and Information Technology Minister regarding Pegasus spyware, tore and dramatically flung them into the air.

Reportedly, the opposition MPs had staged protests, today over the slew of issues including I-T raids on prominent media houses and Pegasus spying controversy. When Electronics and Information Technology Minister Ashwini Vaishnaw rose to speak on Pegasus, his statement was cut short by Trinamool MP Shantanu Sen.

TMC leader Mr. Sen snatched Mr. Vaishnaw’s papers, tore and flung them at Deputy Chairman Harivansh Narayan Singh. Following the incident, the minister was forced to lay the paper on the table instead.

Union Minister Hardeep Singh Puri and the Trinamool MP exchanged heated comments after which Marshals had to intervene in order to put the situation under control.

The Rajya Sabha was adjourned until tomorrow. However, before adjourning the House for the day, Deputy Chairman Harivansh urged members to refrain from unparliamentary behaviour.

“Please do not adhere to this unparliamentary practice," Harivansh said. He went on to say "You do not want a discussion on an issue you have been agitated about...this is undemocratic."

After this unparliamentary behaviour of TMC MP Sen, the Government will bring privilege motion against him. According to sources, the BJP government will request the Rajya Sabha to suspend Mr. Sen for his unacceptable behaviour with Electronics and Information Technology minister Ashwini Vaishnaw.

Swapan Dasgupta, a BJP Rajya Sabha MP, stated, "Some Opposition members, especially TMC MPs, got up and tore the paper from the hands of IT Minister Ashwini Vaishnaw as he was speaking about 'Pegasus.' This is inappropriate behaviour."

"He was making a statement, and you had the right to ask him about it, but instead of engaging in a debate, is this the sort of hooliganism we see in the House? This is entirely contradictory to all norms, and I believe it should be condemned outright "Dasgupta added.

Meanwhile, Manoj Jha, an RJD member, subsequently called the IT minister's attitude "unfortunate. "Based on the manner the IT Minister issued a statement in the midst of the uproar, it appears that the government just intended to make a mockery of this matter," Mr. Jha added.