In one of these videos, police personnel is firing in the air. Seeing this, the Sikh protestor standing next to him is doing Bhangra. 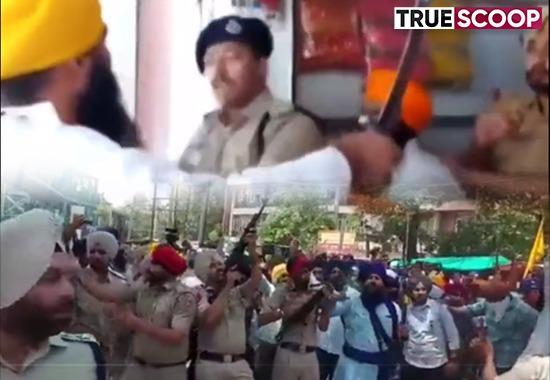 Violence broke out in Patiala yesterday over the anti-Khalistan march. In this, 4 people including 2 police personnel were injured. The police had to fire in the air to handle the situation. Now 2 videos of the same incident have surfaced.
In one of these videos, police personnel is firing in the air. Seeing this, the Sikh protester standing next to him is doing Bhangra. In the second video, the DSP Mohit Aggarwal of Patiala saved the life of a shopkeeper from Sikh protesters.
When two police personnel were firing, a protester came forward. He kept asking the police personnel to fire in the air. As soon as both the police personnel opened fire, he started doing bhangra. However, later other police personnel standing there drove him away.
Also read: Viral Video: Father of 8-year-old daughter brutally thrashed her after quarrel with wife
After Patiala violence, CM Bhagwant Mann summoned officers under the leadership of Chief Secretary Anirudh Tiwari and DGP VK Bhavra. He expressed strong displeasure over the violence. He ordered a high level inquiry to the officers. In which the police and administrative negligence taken in this violence will be investigated.