Addressing the media on Thursday over the busted terror module linked to the PFI, Patna SSP Manavjit Singh Dhillon compared the banned Popular Front of India (PFI) to the RSS. 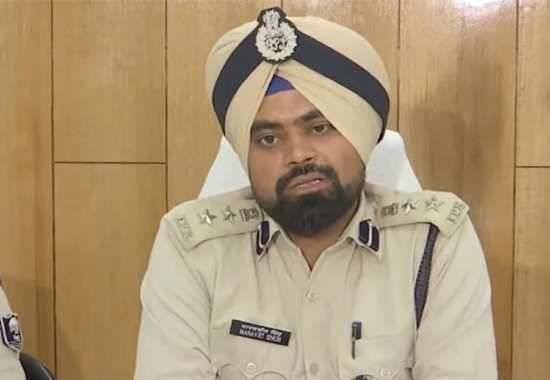 Patna SSP Manavjit Singh Dhillon has been facing criticism on social media and the Bhartiya Janata Party (BJP) after a terror module was busted in Bihar's capital before the visit of Prime Minister Narendra Modi. Addressing the media on Thursday over the busted terror module linked to the PFI, Patna SSP Manavjit Singh Dhillon compared the banned Popular Front of India (PFI) to the RSS.
In his address, Patna SSP said, "The organization worked at Masjids and Madrassas to mobilize youths and worked to radicalize them. The modus operandi was similar to that of RSS shakhas. They train the youth under the guise of physical education and spread their agenda. We got documents of camps teaching martial arts and training members to use sticks and swords under the guise of physical training. The document was being used to radicalize, brain wash and mobilize people,” he said.
Watch Patna SSP PFI RSS Video
Also Read: Patna Civil Court blast video: Constable injured In low-intensity explosion after police kept gunpowder

After Patna SSP's comparison of RSS with the PFI, the BJP slammed the cop and started demanding to shunt him over his remarks. Notably, in Bihar, BJP and JDU are in alliance with Nitish Kumar as the Chief Minister of the State. However, the BJP has the majority of the seats. It is pertinent to mention here that after the outrage against Patna SSP, a show cause notice has been issued against him and he has been given 48 hours to reply over the issue.
Patna Terror Module linked to PFI busted
Reportedly, a terrorist module was busted by the Patna Police and two suspected terrorists, Athar Parvez and Md Jalaluddin, were arrested. According to the police, the module was planning to turn India into an Islamic nation by 2047. There was also a plot to target Prime Minister Narendra Modi during his visit on July 12. The suspected terrorists were being trained at Phulwari Sharif over the last 15 days. They held meetings on July 6 and July 7 to target PM Modi.