The shocking case of data fraud in Bihar was uncovered on the same day that Union Health Minister Mansukh Mandaviya announced that 85 percent of India's adult population has gotten the first dosage of the COVID-19 vaccine. 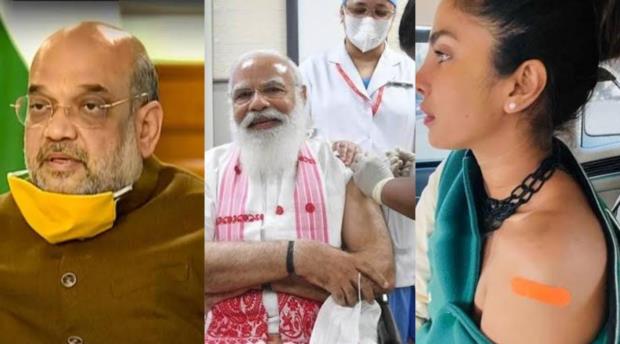 As India ramps up its Covid vaccination drive, an incident of glaring vaccine fraud has come to light. A list of vaccinated people from Bihar's Arwal district featured the names of Prime Minister Narendra Modi, Home Minister Amit Shah, actors Priyanka Chopra and Akshay Kumar among other people. The list was shared on Twitter by RJD Arwal.

As these names submitted by the Karpi community health centre caught the eyes of inspecting officers, two computer operators were suspended.

Several public figures' names appeared on the list, including Narendra Modi, Amit Shah, Sonia Gandhi, Priyanka Chopra, and Akshay Kumar. After videos of these lists went viral, the local government was humiliated and ordered an investigation.

The investigation will examine how and on whose orders the data fraud transpired, according to District Magistrate J Priyadarshini. "This is a serious situation. We are working so hard to increase testing and vaccination, and yet there are so many anomalies. We will examine all healthcare facilities, not only those in Karpi. We will file an FIR, take action, and set a standard,” she was quoted saying by a top Indian media outlet.

She stated the error was found during a recent inspection. "Two operators have been removed," she said, "but I believe that others should be investigated as well."

On the sensitive matter of fraud in vaccination drive, Bihar Health Minister Mangal Pandey said, "I've spoken with the district magistrate and the chief medical officer, and I've asked them to double-check data from other hospitals to ensure there are no errors. If there are any, those who are responsible will be held accountable according to the law. We take this very seriously, and if more cases like this surface, we will take action."

The shocking case of data fraud in Bihar was uncovered on the same day that Union Health Minister Mansukh Mandaviya announced that 85 percent of India's adult population has gotten the first dosage of the COVID-19 vaccine.

Union Health Minister Mansukh Mandaviya on Monday (December 6) tweeted, "Another Day, Another Milestone. 85% of the eligible population inoculated with the first dose of Covid-19 vaccine. With PM Narendra Modi Ji's mantra of ‘Sabka Prayas’, India is marching ahead strongly in the fight against Covid-19."