PM Modi to bring home priceless Indian artefacts from US

Among these artefacts, one is at least 7,000 years old. 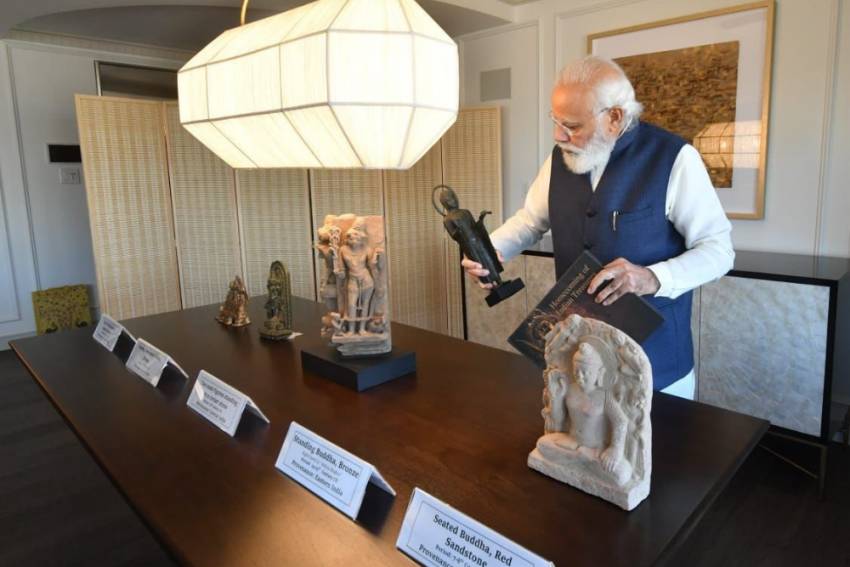 Prime Minister Narendra Modi who went for a three-day visit to the United States is bringing back 157 relics and antiquities to India. These artefacts were given to PM Modi by President Joe Biden, where both leaders pledged to strengthen efforts to fight theft, illicit trade and trafficking of cultural objects.

Among these artefacts, one is at least 7,000 years old.

While handing artefacts to PM Modi, the US said, "conveyed his deep appreciation for the repatriation of antiquities to India by the United States".

Around half of the relics are cultural (71), the other half consists of sculptures related to Hinduism (60), Buddhism (16) and Jainism (9), the official statement said on Saturday. The gifts also contain a one-and-a-half metre bas relief panel of Revanta in sandstone from the 10th CE to an 8.5 cm tall, beautiful bronze Nataraja from the 12th CE.

PM Modi is filled with bilateral meetings and other important appointments scheduled in the US, including his address to the United Nations General Assembly (UNGA).

"The items largely belong to the period of 11th CE to 14th CE as well as historic antiquities such as a copper anthropomorphic object of 2000 BC or a terracotta vase from the 2nd CE. Some 45 antiquities belong to the Before Common Era," the government stated.

Around 13 antiquities were reclaimed by India from different nations between 1976 and 2013, government sources said, adding that since Modi took charge in 2014 more than 200 antiquities either have been returned or are in the process of being returned back.  While, in between 2004 and 2014, India has been returned with only one ancient antiquity, the source said.

The government is continuously pursuing to recover the relics that were stolen or forcibly taken away by colonialist times. These stolen antiquities are being recovered from the US, Australia, Singapore, Germany, Canada and the UK.

In July this year, the National Gallery of Australia had declared that it will return stolen artworks to India which are worth $2.2 million.

Almost every legion of India was looted with its antiquities such as Tamil Nadu, Madhya Pradesh, Jammu and Kashmir, Andhra Pradesh, West Bengal, Uttar Pradesh, Gujarat, Rajasthan, Uttarakhand and Bihar. These stolen sculptures consist of a set of bronze ornate figurines of famous poses of Lakshmi Narayana, Buddha, Vishnu, Siva Parvathi and the 24 Jain Tirthankaras and lesser-known  Kankalamurti, Brahmi and Nandikesa besides other unspecified deities and divine figures.

Nearly 56 terracotta pieces and an 18th CE sword with a sheath that is engraved with the mentions of Guru Hargovind Singh in Persian.

In the past few years, India has reported no theft of any artworks from any centrally protected monument or site museum under the Archaeological Survey of India. This is looked at as an important achievement in protecting the rich Indian heritage.