Following the launch of the trailer from the most awaited film of Salman Khan, ‘Radhe: Your Most wanted Bhai’ now the makers have dropped a hint for the next announcement. Song ‘seeti maar’ featuring Salman Khan and Disha Patani from the movie will soon be released now. Till now the exact release date for the song has not been disclosed.

So far the trailer has received an overwhelming response from the audience. The action drama is scheduled to release on May 13 in a hybrid format that is it will a theatrical release and a digital release too. Other than Salman Khan and Disha Patani the movie stars Randeep Hooda and Jackie Shroff in pivotal roles.

The song the release announcement was made by Disha Patani through her Instagram account. Sharing the poster for new she wrote, “turn up the volume aur ho jao tayaar, kyunki ab aayega Radhe aur Diya ka #SeetiMaarOutSoon”. The poster features only Disha and she can be seen getting prepared to whistle. Well, we got few glimpses of the song in the trailer as well. The film revolves around the story of drug menace and the Dabangg actor will be playing the role of an undercover cop who has been given the task to clean out the drugs from the city. 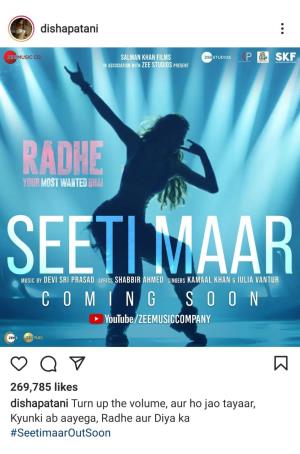 Playing the role of villain, Randeep will be seen in an impressive avatar. Aid the covid surge the makers have planned to release the film in theatres as well as on ZEE5 as a pay-per-view service by ZEEPlex.