No 8 AM theatrical slots available for Prithviraj and Nayanthara's comedy thriller Gold in Chennai; Know Why

Initially, the Tamil version of Gold was canceled citing that the makers hadn't completed the dubbing Author : Tushar Singh 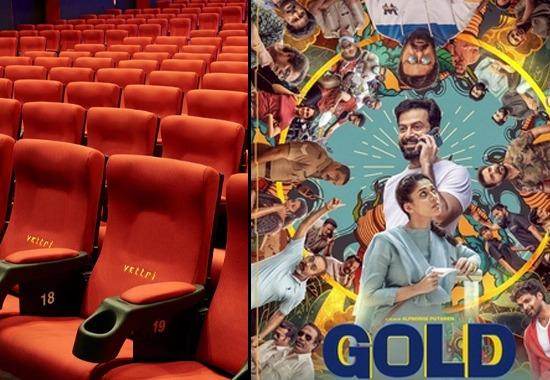 The much-awaited Malayalam movie starring Prithviraj Sukumaran and Nayanthara and Alphonso Puthren’s directorial Gold was released worldwide amidst a huge buzz earlier in today, however, with a suspension which left its Chennai-based fans disappointed.

Based on the instructions coming in from the makers the Gold’s morning show scheduled to begin at 8 was canceled at the last minute. The 8 am shows of Gold (in Malayalam and Telugu) were canceled in Chennai. Theatres in Chennai have been informed that they have received information from the Gold team that the film could be released after 10 am in the city.

The huge fanbase of Puthren who is marking his return to the big screen after 7 years who last directed Premam and a short film in between Aviyal, with Prithviraj, Nayanthara’s starrer Gold were eagerly waiting but were left disappointed on the first day of its release.

Initially, the Tamil version of Gold was canceled citing that the makers hadn't completed the dubbing. Later on December 1, theatres informed the fans that they haven't received the KDM (a key required to play a movie).

Gold OTT Release Date: When & where to watch Prithviraj, Nayanthara comedy thriller on the web space

Based on the reports, surfacing a member from Chennai’s Kasi Talkies while interacting with a media house said, "We did not receive the KDM for Gold for our 8 am show. For now, we have received information that we can play the film after 10 am. Similarly, we had to cancel several shows of the Tamil version on November 30."

For those who don’t know it is for the first time that Prithviraj is acting with Nayanthara in s full-length feature film, though the star duo was seen together earlier in a song sequence in the multi-starrer Twenty-20 which was immensely loved by their fans.

Gold is tipped to be a comedy thriller flick. The film features Prithviraj Sukumaran and Nayanthara in lead roles. The film was initially supposed to release in September during Onam but was postponed. Alphonse informed his followers that he needs time to work on the film and that he wasn't interested in putting up a half-baked product.