Was CM Capt Amarinder Unapologetically Ignored By Sidhu At His Coronation Ceremony?

Amarinder Singh recently said hat he will not meet Navjot Sidhu until he receives an apology for criticising him. 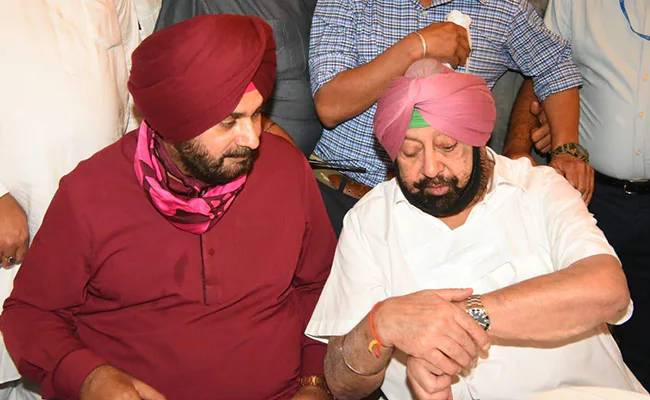 Bitterness in Navjot Sidhu's heart could visibly be seen at the Congress Bhawan when he stood up to deliver his coronation speech and felt like hitting his cricket shot. He ignored Captain Amarinder Singh and Harish Rawat who were sitting just right to him, proceeded to take blessings by touching the feet of former Chief Minister Rajinder Kaur Bhattal.

Earlier the day, the newly appointed state party president Sidhu turned his eyes on Captain in the Punjab Bhawan and moved ahead. Punjab in-charge Harish Rawat called Sidhu back and made him meet and greet Amarinder Singh. Sidhu then refused Singh's offer to come and sit with him saying he's getting late for the ceremony at Congress Bhawan. After several requests, Sidhu went on to sit beside Captain.

Earlier to this meet, on March 18, Sidhu and Captain had a meeting at the latter's Siswan farm house. They both had a 40-minute conversation.

Amarinder Singh was angry over Sidhu's continuous opposing tweets on the Punjab government. Later when Sidhu was made the state party president, Singh had said it clear that he will not meet Sidhu until he apologises to him.

Though Sidhu had a cup of tea and met Captain at the Punjab Bhawan, Sidhu didn't give a public apology that the chief minister had demanded. Everybody present during the coronation ceremony had touched Amarinder's feet, except Sidhu.

Sitting beside, both looked at each other with fluttering eyes, however, didn't speak a word to one another. Former state president Sunil Jakhar, Punjab Congress in-charge Harish Rawat, former chief minister Rajinder Kaur Bhattal, Captain's wife Preneet Kaur were also on stage to witness the event.

After the coronation program, Captain will visit Zira in the Ferozepur district, to meet the families of those killed in the Moga accident.

Sidhu along with his family reached Chandigarh for the coronation event from their Patiala residence. On Thursday, before leaving his kothi in Amritsar, Sidhu first met two eminent leaders of the city and then left for Patiala. Sidhu, however, had planned to go straight to Chandigarh but changed his schedule at the last moment.

Strict security arrangements have been made by the Chandigarh Police to ensure that the guests do not face any problem. Police force has been deployed around the Congress building. SSP Kuldeep Singh Chahal himself will be present on the spot. Keeping the ceremony in view, section 144 has been imposed in Chandigarh.

Meanwhile, the CMO has said Amarinder Singh had staunchly cleared at a meeting with senior party leaders that he will not privately call and ask Sidhu to apologise if the latter doesn't.

Coronation is a party program and  Captain Singh will be a part of it. There may be a chance of ending the battle between both parties, however, Amarinder is adamant about receiving an apology from the former cricketer.

For the uninformed, on Thursday, the new working president Kuljit Nagra and Sangat Singh Giljian met Captain and gave him a formal invitation letter for the program. Apart from the four working presidents, Navjot Singh Sidhu also signed this letter.

Navjot Sidhu overlooked the orders of the high command even before being crowned as the state Congress President. On Thursday, Congress was supposed to submit a memorandum to the governors in the Pegasus espionage row but no such demonstration was held in Punjab. Sources say that Sidhu had expressed his inability to be a part citing his busy schedule.