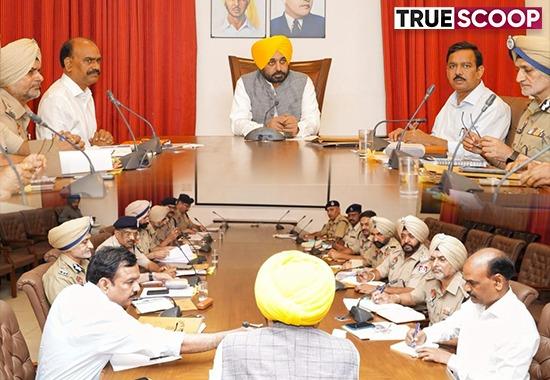 Underscores need to bring all the drug addicts back in the mainstream
Chandigarh, May 9: Showing zero tolerance towards the menace of drugs, the Punjab Chief Minister Bhagwant Mann on Monday categorically directed the police force to launch a major crackdown on the unscrupulous elements selling drugs besides also tightening the noose around any political functionary interfering with its anti-drug campaign.
Chairing a high level meeting of STF with senior police officers of all districts through video conferencing here at his official residence, Bhagwant Mann unequivocally said that neither political persons nor officers would be spared at any cost, if found conniving with the drug mafia. He, however, asked the police officers to work freely without any political pressure with a sharpened focus to make Punjab a drug free state. Without mincing any words, the Chief Minister said, “To my mind, some police officers might have been working earlier under certain compulsions but all the officers are not alike. However, few drug peddlers might be getting political patronage in past but now this shall not happen and all of you should work fearlessly in a direction to wipe out the slur of drugs from the state”.
Emphasizing the need to break the supply chain of drugs, Bhagwant Mann asked the police officers to arrest those who are actually selling drugs not the drug addicts as these persons have already become victims of the drug mafia. He said that with this initiative, ultimately the backbone of the supply chain would be broken and Punjab would soon become a drug-free state adding this could not be accomplished without the wholehearted support of police force.
Focusing his government’s priority on the rehabilitation of drug addicts after crackdown on the drug smugglers, Bhagwant Mann underscored the need to bring all those back in the mainstream, who had gone astray in the past. The Chief Minister further said that his government would strive hard to run the drug de-addiction centres across the state efficaciously while ensuring there is no shortage of medicines besides running counselling programmes so that the youth after treatment should not again fell prey to drugs.
Also Read: Sidhu-Mann meeting may invoke disciplinary action against Sidhu
Appreciating the Punjab police for valiantly combating the black phase of terrorism across the state, Bhagwant Mann hoped it would now set an example by completely vanishing the drug terror, which has ruined the lives of our youth. He asked police officers to be vigilant while tackling the drug menace with heavy hand and should be aware who, where and what kind of drugs were being sold within their jurisdiction.
Prominent amongst others present on the occasion included Additional Chief Secretary to Chief Minister A. Venu Prasad, STF Chief Harpreet Sidhu, ADGP Intelligence SS Srivastva and others.