Navjot Singh Sidhu has been targeted by youth Congress chief over his meeting with chief minster Bhagwant Mann. 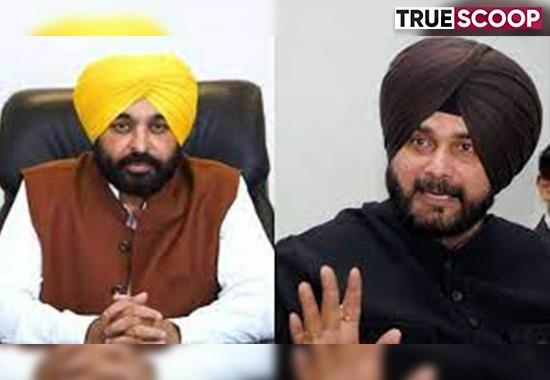 There has been a conflict of interest in the Congress considering the meeting of former Punjab Congress chief Navjot Sidhu with CM Bhagwant Mann. Sidhu’s meeting falls on a day when the Congress Working Committee (CWC) is also going to held a meeting in Delhi to finalise the agenda for “Chintan Shivir”.
Yesterday, the cricketer-turned-politician tweeted about his today’s meeting with CM Bhagwant Mann regarding the revival of Punjab’s economy.
Punjab Youth Congress chief Barinder Singh Dhillon has condemned Sidhu.
In his tweet he targeted Sidhu by calling 'Thoki Chal Party'. He also pointed out the alleged former meetings of Sidhu And Mann which was held before election.

Dhillon had earlier clashed with Sidhu in Chandigarh. Sidhu mentioned the presence of some dishonest leaders in the Congress during a demonstration against inflation. Dhillon then asked Sidhu to tell their names.
However, PPCC president Amrinder Raja Warring avoided to react on Sidhu’s announcement, he expressed that  Sidhu has not informed the party about the meeting. Now this issue has been flagged to the leadership.
State affairs in-charge Harish Chaudhary had also complained to party president Sonia Gandhi about Sidhu’s “anti-party activities”.  The written complain was sent to the AICC’s Disciplinary Committee.
Also read: Harish Chaudhary's letter to Congress High Command against Navjot Sidhu over anti-party activities
He had written to Sonia Gandhi that that he had received a note regarding Sidhu, emphasising that he could not be allowed to project himself “above the party”.  In a similar event, the party had already removed Sunil Jakhar from all party posts for “anti-party remarks”.